‘Boots on the Ground’ with Congressman Kahele

“One of the biggest things that we jumped right into and was very beneficial that we came was this transition for our veterans from Molokai General Hospital to something else that is still undetermined but we think is a new partnership between the Veterans Affairs and Na Pu’uwai,” said Kahele during a Dispatch interview last Wednesday. “Our veterans are anxious — we have 300 to 400 veterans that are here on Molokai — some very active in our veteran center and VFW, some not so much, but all requiring some level of veterans health care administered through the VA Pacific Island Healthcare System based out of Honolulu.”

He said for the past 20 years, the VA has offered health care on Molokai through a year to year memorandum of agreement with Molokai General Hospital, where veterans have received care out of the Outpatient Clinic. But that contract expires March 31, with no solid plans of what will come next.

“The problem seems to be Veterans Affairs that has been slow rolling this situation,” he said. During his visit, he met with concerned veterans, Molokai General Hospital and Na Pu’uwai staff, Kahele said.

“You’re having this break and transition between March 31 and whenever the VA can fully implement their plan to move to Na Pu’uwai,” he explained. “[After COVID], veterans want to get back to in person health care but right now they’re faced with the uncertainty of what does that healthcare look like… Telehealth really doesn’t exist, it’s really the patient calling in to the doctor saying, ‘Hey, I’m having a hard time breathing, this is what my vitals are telling me over the phone, can you help me?’ That is unacceptable for Molokai veterans and I’m not going to tolerate that and we need to do better for our service members.” 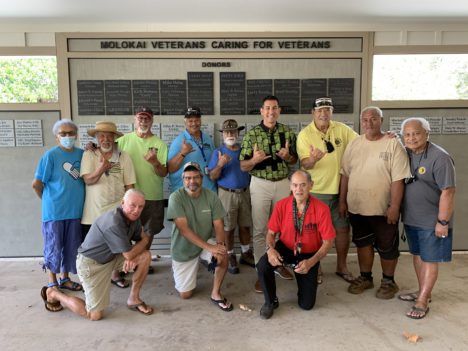 Kahele said he followed up with the VA last week to ask specific questions about how and when the transition will take place, and request an additional position to help facilitate VA healthcare on Molokai.

Many conversations were possible only because he had “boots on the ground” on the island, he said, reiterating the importance of in-person visits.

He said additionally, he had many good meetings with young, emerging leaders on Molokai.

“We talked a lot about the renewable energy plan and that’s something I’m very interested in,” he said. “We talked about transportation infrastructure, specifically [on the east end by Our Lady of Seven Sorrows church] and what’s happening there. The bipartisan infrastructure bill we passed in November is bringing $3 billion of hard infrastructure to Hawaii, roads, bridges, highways, modernization projects. I want to make sure Molokai gets their fair share of surface transportation infrastructure improvements and one of the main things we need is that issue fixed, whether it needs to go mauka or a go-around, I want to make sure that’s done.”

He met with Molokai’s Loke Pettigrew, who is working with the National Indigenous Women’s Resource Center to create programs in Hawaii to prevent violence against women and reduce domestic and sexual abuse in communities.

He discussed concerns with helicopter tours over Molokai, which he said he would bring to an upcoming air tour regulations meeting. He also talked to residents about tourism and what managed tourism should look like moving forward, particularly with respect to Molokai and its environment.

“Molokai is a special place,” said Kahele. “I think one of the best parts of the trip — besides meeting everyone and having the chance to drink coffee every morning with the veterans at Kanemitsu’s at 5:30 in the morning — was just going with my wife and kids out to the beach at Kaluakoi and we just sat on the beach, watched the sunset and basically there was no one there. It’s really special when there’s places like that in Hawaii you can still go to with your children and play and just enjoy life.”