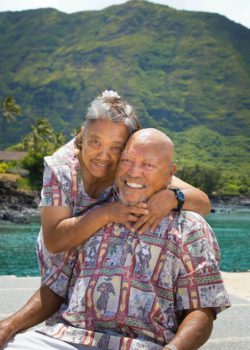 By Valerie Monson, Special to The Molokai Dispatch

Kalaupapa leader Clarence “Boogie” Kahilihiwa was a man for all ages.

“I think it was just his presence,” said Brother Noland, the legendary musician, author and mentor to young people. “He had that charisma, he was vocal, he had the personality and that great attitude.”

Kahilihiwa — known since childhood as Boogie — died March 5 at Leahi Hospital, barely a month before his 80th birthday. He leaves behind his beloved wife of 43 ½ years, Ivy, and a multitude of friends from near and far, enough to fill an arena. When Boogie’s death was announced, condolences poured in from across the islands, the Mainland and Belgium.

But nowhere was the loss fell greater than his beloved Kalaupapa. His friends who had become family could not imagine life without him.

“Uncle Boogie was nothing but love,” said Andrew Cuello who has worked at Kalaupapa for nearly 20 years. “He was like my second grandfather.”

Boogie came a long way from the little boy whose parents were forced to give him up when he was just 9 years old. He was born in Kalapana, the sixth of 11 children, but in 1950 Boogie was diagnosed with leprosy and life changed. For his anguished parents, Boogie was the fourth child who would be taken from them because of the disease.

Young Boogie was admitted to Hale Mohalu, the residential treatment facility in Pearl City, with his mother and father by his side.

Boogie had to grow up fast. The older folks at Hale Mohalu took him under their wing, the younger ones became his friends. Because a sister, brother and brother-in-law were still living at Kalaupapa (one sister had already died), he began visiting the settlement and immediately felt at home, not only fussed over by his siblings, but by the older Kalaupapa residents. He relocated in 1959.

The medicine that eventually cured leprosy had been introduced to Kalaupapa in 1946 so Boogie could have left the settlement when he was well, still a young man. One of the main reasons he would remain: he worried about those older folks who had once worried about him.

“I just didn’t want to go,” he said during an interview with this writer. “A lot of our people had gotten older and if we (younger ones) don’t stand up for them, the government will step on them. I didn’t want to leave our people.”

Boogie would go on to become a community leader in different ways. He worked for the State Department of Health for 40 years, mostly as a painter, was a faithful member of St. Francis Church who, along with Ivy, attended the canonizations of both Father Damien and Mother Marianne in Rome. He was an active member and former President of the Kalaupapa Lions Club. Since 2009, he was President of Ka ‘Ohana O Kalaupapa, a nonprofit organization dedicated to remembering each of the nearly 8,000 people who were sent to Kalaupapa.

Once the young boy who needed kupuna to watch out over him, Boogie would later find himself as mentor to the younger workers who came to Kalaupapa.

Andrew Cuello was just 19 when he began working with the State DOH. His supervisor was Ivy Kahilihiwa. He soon found himself under the wing of Boogie.

“I was a young guy back then, didn’t know anybody,” said Andrew. “I think that’s why Uncle kept an eye on me, to make sure I was OK.”

Andrew soon learned that he and Boogie shared a love of the ocean. They enjoyed “countless trips” on Boogie’s boat where Boogie would point out landmarks and special places. Andrew eventually got his own boat and took Boogie on what would be his last trip on the water.

“The look on his face was priceless,” said Andrew.

After retiring from the state, Boogie became manager of the Kalaupapa Bookstore where his personality charmed thousands of visitors who he greeted like old friends.

Brother Noland had made several trips to Kalaupapa by the time he began working on his book, “Lessons of Aloha,” where he traveled the islands in search of everyday people whose lives were examples of sharing and caring. Not surprisingly, Noland chose Boogie as one of those featured in the book.

“He didn’t let what happened to him [leprosy] interfere with living his best life,” said Noland. “Of course that’s the lesson of Kalaupapa: to have that kind of attitude.”

As president of Ka ‘Ohana O Kalaupapa, Boogie wanted to see a memorial built that would list the names of everyone sent to Kalaupapa. He remembered when the Kalaupapa community began talking about a memorial in 1985. He was at the forefront of ‘Ohana efforts the past 12 years and was deeply dismayed when he realized the Memorial would not be built in his lifetime. He was also adamant that the lands of Kalaupapa — so coveted by others — remain in Hawaiian hands.

As he got older, Boogie grew stronger in his identity as a Native Hawaiian and standing up for Hawaiian rights, crediting the late Kalaupapa leader Bernard K. Punikai`a as a role model. Along with his work for Ka ‘Ohana, Boogie felt a responsibility to remember the voices of those who have died.

“I’ve had to rediscover myself as a Hawaiian,” he said at a meeting in 2009. “I will never be denied to act in that manner. I represent all the bones of my kupuna who have already passed.”