A man in a homemade, 22-foot boat was rescued off Kalaupapa by the Coast Guard early last Friday morning, Feb. 17. The Coast Guard received a mayday call at 1:43 a.m. from the vessel’s 52-year-old occupant  — who remains unidentified by officials as of Sunday. At 3:08 a.m., the Coast Guard’s dolphin helicopter crew hoisted the mariner from his fiberglass vessel, the Harmony B.

With windy weather and 7-foot seas at the scene near the Kalaupapa lighthouse, the boat’s captain said he believed his anchor was no longer holding and was concerned that the weather conditions would push his vessel onto the nearby rocks, according to the Coast Guard.

No injuries were reported, and the mariner was flown safely back to the Coast Guard’s air station. The Guard reported that he will work with Sector Honolulu personnel to develop a salvage plan for his boat.

The same night, the Coast Guard also rescued six boaters from a grounded sailboat off Oahu. 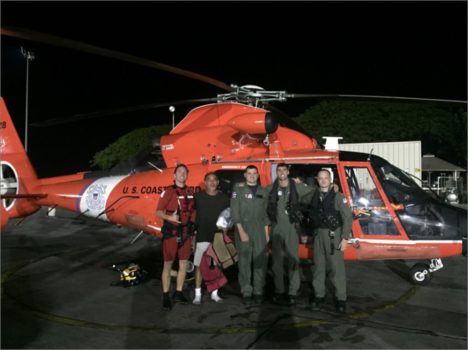