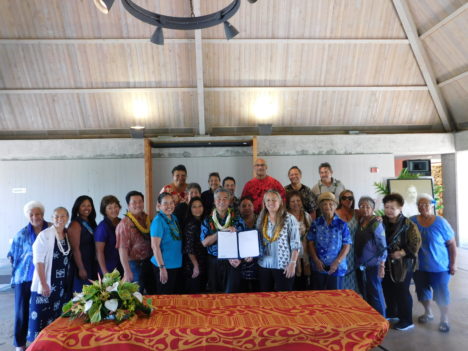 Last week, Governor David Ige signed a historic bill on Molokai that changes the blood quantum requirement for successorship to Hawaiian Homestead land from one quarter to one thirty-second. It marked the first time a bill has ever been signed on the island, and held special significance for Molokai homesteaders.

Hawaii’s first homestead was established in in Kalama`ula in 1921, and Department of Hawaiian Homelands Chairperson Jobie Masagatani said Molokai homesteaders once again came forward as leaders in spurring Bill 451 forward.

“[It] actually was the beneficiaries from Kalama`ula initially who came to the [Hawaiian Homes] Commission and asked for [their] support…” said Masagatani during the signing ceremony at Kulana `Oiwi last Wednesday. “This issue was really important and critical for families in the oldest homestead areas… their homesteads had been in their families for three, four and five generations, and unfortunately as much as their parents may have tried to persuade them to fall in love with the Hawaiian boy next door, they fell in love with the Filipino boy across the street,” she laughed.

Inter-racial marriage and blended bloodlines have caused many descendants to have less and less Hawaiian blood. Masagatani explained that now, “even though they had been raised on the homestead, the homestead had been in their family forever, and that was their `ohana,” many children and grandchildren of homesteaders don’t have enough blood quantum to retain their family’s hard-worked land.

The bill, championed by Molokai’s Rep. Lynn DeCoite — herself a Ho`olehua homesteader — and widely supported by many Hawaiians across the state, has now been signed into Hawaii state law but still needs approval from Congress.

“While we are celebrating today, our work is not over, we all still need to work with our Congressional delegation to get the congressional consent needed to make this change to happen,” said DeCoite. “I am hopeful, we just need to stay focused, and keep our eyes on the final goal – to keep Hawaiians on the land as was the original intent of Prince Kuhio.”

Under the Hawaiian Homes Commission Act of 1920 — representing the vision and legacy of Prince Jonah Kuhio Kalaniana`ole — 99-year leases can be awarded to those with at least 50 percent Hawaiian blood for $1 per year. The new bill does not propose to change that percentage for beneficiaries to be initially awarded land; it only lowers the percentage necessary for successorship of leases from relatives. Currently, Hawaiian Homes lessees can only designate a spouse, child, grandchild, brother or sister who have a blood quantum of one quarter Hawaiian as a successor to their lease.

Opponents of the measure point to a growing list of Hawaiians still awaiting homestead land to be awarded to them. A 2014 Department of Hawaiian Homelands report indicates more than 27,000 individuals are on a wait list for leases, and some waiting decades have passed away before receiving land.

However, supporters of the bill say it will actually decrease the backlog, as it seeks to reduce the trend of families selling their homesteads rather than the land being placed back into the pool for re-assignment.

“For the people who said this bill does not address the list, it completely addresses the list, because it stops the sale when it can no longer [be passed] down,” said DeCoite. “It really was the guts behind the bill… we saw that many of the lots were being sold, and it wasn’t being sold to the person at the top of the list.”

Ige spoke of the bill’s importance to future generations in an interview with Akaku Molokai intern Kamuela Sagario.

“It’s very important to the homesteaders because it allows them to assure that those who had received leases a number of years ago can keep the lease in their family,” Ige said. “That has become more and more of a concern to the homesteaders, especially as we approach the 100th anniversary of the Hawaiian Homes Commission Act. We are getting to the third, fourth, fifth generation of the homesteaders inheriting the leases so this is becoming more important.”

Many see the bill as a means to preserving Hawaiian lands moving forward.

“I think our community has waited many years for this to happen,” said homesteader and Molokai Hawaiian Homes Commissioner Gene Ross Davis in an interview with Sagario. “… We are looking for perpetuity, and this is just short of it for our people. Being the oldest of Hawaiian homestead communities, it was important for us to acquire this bill signing. [We’re] looking for the next three or four generations to be upon our lands.”

In his testimony supporting the bill, which was joined by testimony from dozens of other Molokai homesteaders and homestead associations during the lengthy legislative process, Ross Davis added that the bill is closely linked to the health of the land.

“The preservation of Hawaiian culture, social tradition, cultural lifestyle and economic stability are tied to the land,” he wrote. “It is important for continued rehabilitation processes to be in place. Lowering successor ship will allow families to pass on their valued inheritance and traditions to future generations.”

When it was passed in 1921, the blood quantum requirement of the Hawaiian Homes Commission Act was controversial, and Kuhio advocated for a lower level to be more inclusive of all those with Hawaiian ancestry.

“I want to mahalo this island,” said Masagatani. “If it wasn’t for Kalama`ula, Molokai, and Ho`olehua, we wouldn’t have the homestead program. It really was your kupuna that made this possible for all of us, and so thank you, Governor, for allowing this opportunity to happen here because it does really honor our beginnings and hopefully what Kuhio intended, which was for this land to stay in your families for generations.”