Blessings from the Barge 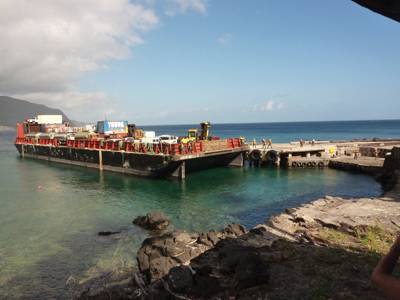 The normally calm demeanor of the Kalaupapa settlement was replaced with hustle and bustle on Saturday morning as residents chatted excitedly about what many have dubbed “Christmas in July.” It marked the once-a-year barge that hauls in essential supplies like building materials, fuel, vehicles and other goods from Oahu to the isolated settlement.

Hawaiian interisland shipping company Young Brothers Ltd. currently has a five-year contract to bring in the barge, which costs $200,000 every year, according to Kalaupapa DOH Administrator Mark Miller. This is the only vessel in the state that’s small enough to fit in the remote harbor, and timing is critical. A narrow window of calm surf in the summer allows it to dock safely.

Among one of the settlement’s most noteworthy shipments this year was a 24-foot container filled with medical supplies for disaster preparedness, brought in by the Healthcare Association of Hawaii. 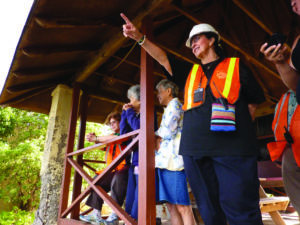 “We’re very excited to have these supplies because they give us a sense of security,” said Carol Franko, Department of Health’s (DOH) Nursing Supervisor. She said the supplies provided by the Healthcare Association will allow residents at the settlement the necessary means to survive for up to 96 hours in the case of a natural disaster, such as a hurricane, earthquake or torrential rains.

Another essential element of cargo is the settlement’s annual supply of fuel. Saturday’s shipment carried over 30,000 gallons of gasoline, which is about the same as last year, according to Miller. The shipment will be enough to sustain the current ration of 7 gallons of gas per vehicle per week — enough to go about daily activities on the less-than-15-square-mile peninsula. After the barge comes in, the price for fuel is set for the year. Last year, Kalaupapa residents paid $4.11 per gallon, whereas this year, Miller expects the price to be in the $5 range. 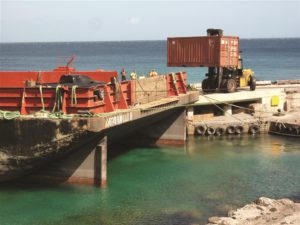 For many, one of the most exciting items to come off the barge this year is a 5-foot-tall, white marble statue of Mother Marianne. She will be canonized in October, making her the Kalaupapa settlement’s second saint after Father Damien. The statue was donated by John Parreira, who also donated several other statues in St. Francis church.

“This is a momentous day,” said Sister Theresa Chow of the Bishop Home. Patients will appreciate the addition of the statue because “[Mother Marianne] worked here, lived here and the patients all know her,” said Chow.

The statue will be installed opposite of Saint Damien’s statue inside the St. Francis Church.

The peninsula is the United States’ smallest county, Kalawao. For the first time this year, its honorary mayor attended the barge’s arrival. Loretta Fuddy, director of the DOH — a position that also comes with the title of mayor — said she was very impressed at the efficiency and sense of community she saw on Saturday, the first time she’s witnessed the docking of the barge.

“Everyone pulled together to get the job done,” said Fuddy. “It was like a ballet or a rehearsed play -everything moved very slowly and everything went well with no injuries.”

Among other goods were three electrically-powered vehicles, household furniture and over $400,000 in supplies from the DOH.

Franko would like to thank Toby Clairmont for his efforts in bringing these supplies to Kalaupapa.