Blessing of a New Canoe 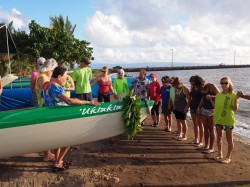 Members and friends of Molokai’s Wa`akapaemua Canoe Club gathered last week to celebrate the blessing of a new canoe. Made by Tiger Canoes on Hawaii Island, the six-man vessel is designed for open ocean and built to be light and maneuverable, representing the latest advances in the traditional sport. Wa`akapaemua members say the canoe is an exciting step forward for the club, whose paddlers have a history of top finishes in state and channel races.

The canoe was christened “`Ukiukiu,” a name that refers to one of Molokai’s winds.

“Since this was a racing canoe, an appropriate name should reflect movement, speed, or reflect winning or something of that nature,” said club board members, via email, referring to consultations with fluent Hawaiian language speakers and cultural practitioners about the canoe’s name.

`Ukiukiu is one of two wind names for Kalama`ula, an area frequently paddled by the club, “blessed by the cool ‘Ukiukiu wind,” they wrote.

Kahu Anna Lou Arakaki offered the blessing, praying for the success and safety of all those who will paddle the canoe. With heads bowed and hands held in a circle around the lei-laden canoe, members and their ohana celebrated the new acquisition.

The club’s keiki canoe, the Manini, was also officially blessed for the first time. While the vessel used by Wa`akapaemua’s youngest members is not new to the club, it was recently repainted and was included in the blessing ceremony.

Molokai High School’s girls paddling team members were the first to paddle `Ukiukiu. The girls have placed first and second in every race so far this season and hope to represent Molokai well at the state level.