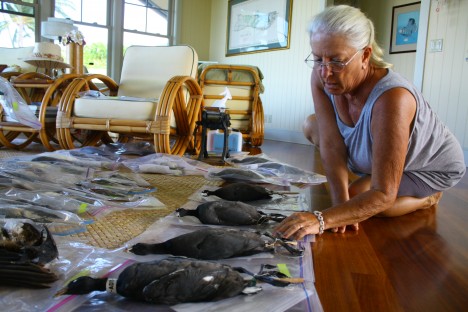 Hawaii’s native bird population is in peril, with 23 birds already extinct and more than 30 of the state’s avian species in danger of becoming extinct, according to a federal report.

However, fossil and sub-fossil discoveries and collections of specimens are providing a wealth of information that may save the birds. The first fossil findings took place on Molokai over 40 years ago, putting the island at the forefront of action and bringing in notable inquisitive scientists.

“It took millions of years for these birds to come to Hawaii and evolve into amazing species and once they’re gone, they’re gone,” said Molly Hagemann, the Bishop Museum’s vertebrate zoology collection manager. “It’s part of Hawaii and I’d love if there was more awareness and funding to try to help them.”

The first major advance in bird paleontology in the Hawaiian Islands came with Joan Aidem’s discovery of goose-like fossils in the Mo`omomi dunes of Molokai in 1971, according to Hagemann. This finding by Aidem, a Molokai resident and naturalist, started a flurry of fossil hunting discoveries throughout the islands.

Hagemann visited Molokai last weekend to meet with Arleone Dibben-Young, Molokai’s water bird researcher, and view her extensive collection that will go to the Bishop Museum later this year. She also had the chance to meet Aidem..

The collection at the Bishop Museum offers a good range of birds from different geographic locations, time periods and species types. Hagemann said the museum currently holds 35,000 birds and bird specimens in their collection. Out of that number, there are 5,300 bird specimens of eggs, nests, stuffed skins, skeletons and sub-fossils, a fossil that hasn’t completed the mineralization process. Only 81 of those specimens have been received from Molokai since 1902, according to the museum’s database.

Molokai’s contribution is about to change. Dibben-Young will add roughly 40 valuable water bird taxidermy specimens from Molokai to the museum increasing the collection dramatically.

Hagemann said she is thrilled to get more native bird remains from Molokai to add to the collection and contribute to the evolutionary timeline.

“The more comprehensive the collection is, the better it is for scientific research,” Hagemann said. “Our coverage over time and the number of species is really unparalleled.”

The Bishop Museum limits itself to species found in the Hawaiian Pacific and has the world’s best collection of Hawaiian birds. Parts of the collection predate collectors from larger European museums and date back to the 1850s, Hagemann said.

“It’s important to preserve these things in perpetuity because we just don’t know the kinds of things they will yield in the future,” Hagemann said.

While studying fossil collections is providing answers to extinction of native birds of the past, the endangerment of today’s living Hawaiian birds remains a predicament.

Hawaii’s native birds are threatened by the destruction of their habitats, invasive plant species and feral animals like pigs and goats.

Habitat loss and predators are part of the problem, along with a lack of funding to figure out why populations are declining and how to stop it, Hageman said.

“It’s extremely important to preserve habitat and cut down on the number of invasive species, that’s really what is hurting these birds now,” Hageman said. “This is a four billion year legacy that’s being destroyed. People think the situation is static but it’s happening now. These birds are disappearing right now.”

During Hagemann’s visit, she also met with Molokai High School (MHS) students and sisters Lily and Sarah Jenkins, who have been assisting Dibben-Young with her wetland research since 2006.

“It takes drive, initiative and responsibility,” Dibben-Young said. “My students have learned stuff that even PhDs have not learned by hanging out, learning about the birds, doing fieldwork and starting it at a young age.”

Hagemann stressed the importance of getting the next generation involved in caring for native Hawaiian birds. She said Dibben-Young’s outreach and youth education is amazing and is a great need for the state.

“I’m really excited that [Dibben-Young’s] got two students born and raised on Molokai who are very involved,” Hagemann said. “We need to get the next generation involved. They think someone else is handling it, but that needs to change. That’s really a problem here in Hawaii…and we have a lot of work to do.”