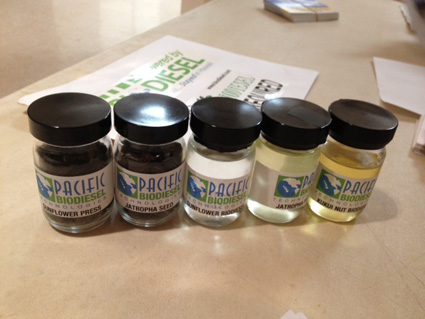 Samples of biodiesel fuel made from sunflower, jatropha and kukui nut. Photo by Eileen Chao.

Kukui nuts have long been used by Hawaiians for food and medicinal purposes, but it may soon be also used for fuel –specifically, biodiesel fuel. Wayde Lee, who created the Molokai Sustainable Farming Project (MSFP) last year, has been exploring biodiesel initiatives that he said may lead to economic stability and energy security for Molokai farmers. Recently, they’ve been working with Maui-based company Pacific Biodiesel (PBD) to discuss the possibility of eventually developing a crushing and processing plant on-island that would produce biodiesel fuel for Molokai from crops farmed on Molokai.

According to Wescott Lee, Wayde’s brother and MSFP’s project facilitator, over 2.5 million gallons of diesel are imported to Molokai every year, most of which goes towards powering the Maui Electric Company Molokai electric plant. He estimated that in 2008, the cost of the island’s imported diesel was around $9.1 million dollars, a sum that can stay on Molokai if the proposed biodiesel project comes to fruition.

“We’re trying to revitalize economics on Molokai and boost the economy,” said Wescott. “If I had to sum it up, the project is about economic recovery, employment opportunities and nurturing Molokai’s environmental conscience.”

The proposal was widely supported by Molokai farmers who attended an information meeting last week. They would be able to plant whichever crops they believed yielded the most oil, from kukui to jatropha, and then bring them to the processing plant, which would be operated by Pacific Biodiesel but owned ideally by a conglomerate of local organizations, according to Wescott. From there, the crops would be crushed and processed into fuel at a processing site on-island and –as long as the fuel meets necessary commercial standards – farmers would be reimbursed based on how much fuel their harvest produced.

“This is a good project for us because we homesteaders do have the land and water,” said Hoolehua homesteader Kammy Purdy. “It’s just getting people to use them.”

As of right now, the project –named the Molokai Kaleinaulu Project – is still in the early research and development phase. MSFP is currently trying to test which plants yield the most fuel, experimenting with sunflowers, peanuts, soybeans, coconut and its signature feedstock, the kukui nut. Wescott said the Kaleinaulu Project will focus primarily on indigenous plants, and is currently in contact with a nursery for native plants to research what other crops have high oil content.

Biodiesel is a renewable energy source – it is produced from crops, recycled oils or animal fats, PBD Vice President Kelly King explained in a presentation at Hoolehua Homestead Association’s general meeting on Thursday. As such, it has a high energy balance –one unit of energy input will yield over five units of output, which means it is still economically feasible even in a small venue. A single acre of land would be enough to grow an estimated 81 kukui trees, which would produce 7.1 tons of feedstock, processed into 640 gallons of biodiesel. Multiply the amount of acreage the island has and with such yield, Molokai could theoretically produce enough biodiesel fuel to sustain itself, according to King.

“The yield we get out of this is phenomenal,” said Wescott. “We’re not trying to build something huge, but build capacity as we see farmers need.”

The fuel produced through these crops will be just as effective as regular petroleum diesel, according to Kelly’s husband and PBD President Robert King, who worked as a diesel mechanic for 30 years.

“Rather than changing the engine to run on vegetable oil, we took the oil and converted it so that it looks like diesel to the engine,” said Robert. “If we make [it] correctly, the engine won’t know the difference…it is diesel fuel, but it is diesel fuel where the money stays here on Molokai.”

One of the governing mottos of PBD, Robert said, is: “Think globally, act locally!” Since its inception in 1996, the company has remained committed to community-based production model, which focuses more on developing locally-based self-sustainable systems instead of centralized facilities that require extensive importing and exporting between islands. They are built on the idea of local resources, production and distribution, said Robert.

“We want this to be Molokai-owned,” he said. “If this is something you want, we can help get it here, but it has to be something the community wants –otherwise it’s not going to work.”

The Kaleinaulu Project is currently looking for funding or grants for crop research and processing plant designs, and participants hope to gather enough data through the efforts of volunteers from Molokai to put in a comprehensive report to be submitted to Sen. Daniel Inouye’s office to secure grant monies. From there, more research would need to be conducted, a business plan developed and community input gathered. Realistically, it will probably be three to four years before any developments take place on Molokai, said King.