Each week, 4,000 copies of the Molokai Dispatch appear across the island. Free for local readers, the paper is found in island shops, businesses, organizations and schools.

It may seem that something so readily available is created with ease, but the small weekly publication first takes around 200 hours of work to write and layout on island. It then makes an impressive journey to Maui and back each week before it is distributed to the community. 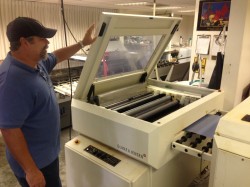 Willy Ferreira prepares the Molokai Dispatch at the Maui Prepress

Since 1900, Maui News has owned and operated its own printing press. Today, the bright red DGM Advantage II Press is the biggest and most versatile press in Hawaii, printing over 20 publications, including the Pacific Business News, Maui Weekly, Honolulu Weekly, Kauai Penny Saver, and even the Hawaiian edition of the Wall Street Journal.

A few weeks ago, the Dispatch staff visited the Maui press and talked with prepress supervisor and newspaper guru Willy Ferreira to find out just what the paper goes through before it returns to Molokai.

When asked if he gets to be the first to read any of the publications he prints, Ferreira shrugged and replied, “I just don’t have the time.”

Late Sunday night, a PDF file of the completed Dispatch newspaper is sent electronically to Maui News in Wailuku. Bright and early Monday morning, Ferreira opens up the document and begins the planning and preparations needed to transform the Dispatch into a newspaper.

From multiple computers, Ferreira is able check resolution, correct color profiles and much more. Once the Dispatch is prepped and ready, he sends the document to a machine that places the image on a polymer coated metal plate. 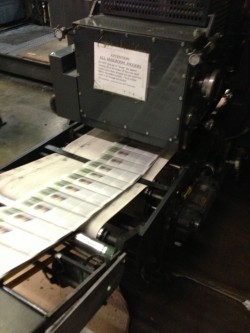 Four thousand copies of the dispatch are printed, folded and bundled in less than 20 minutes

The plate acts as a template, allowing the high resolution image to be printed repeatedly on newsprint in a process called offset lithography. Plates take about 90 seconds to create, and the process requires a plate for each black and white page and four plates for each color page.

From here, the plate is loaded onto the press and printing can begin.

The efficiency of the press and its workers allows the 4,000 copies of The Molokai Dispatch to be printed, folded, and bundled in less than 20 minutes.

The two story machine is housed in its own warehouse along with rolls of newsprint, some stacked as high as the ceiling. Workers move more than 300 pounds of the thin paper on which to print the Dispatch and never leave a wrinkle. For those who get frustrated with a small home or office printer, try to image what a paper jam in a press of this size might be like.

“When it’s going full speed and something goes wrong…it’s a mess,” Ferreira laughed.

On Tuesdays the paper is shipped overnight to Molokai via FedEx. Dispatch staff receive the shipment at the airport on Wednesday afternoons and the latest stories, events and photos can be at your fingertips by about 2:30 p.m. the same afternoon.

The Future of Printed Media

Ferreira has worked at the press for 28 years and has seen the decline in printed media first hand. He originally started as an apprentice in the press room and worked his way up to a supervising position. Like the technology, he has had to grow and change.

“When things evolved, I evolved with it,” said Ferreira, referring to the shift to digital media.

Ferreira is optimistic for the future, though. He has seen only a handful of small papers close and knows that there is still a place for them in today’s culture.

“When television came out everyone thought newspaper was going to die,” Ferreira explained. “But older people like the feeling of the paper in their hands.”

Ferreira doesn’t deny that the industry has changed, noting that the younger generation now gets information from blogs and the Internet.

Ferreira said that he enjoys his job and likes the people he works with.

“I’m hoping [newspapers] stay around until [my] retirement,” he laughed.

One Response to “Big Journey for Small Paper”