The Molokai Hoe: Battle of the Paddle

Inside a Molokai crew’s voyage across the Kaiwi Channel 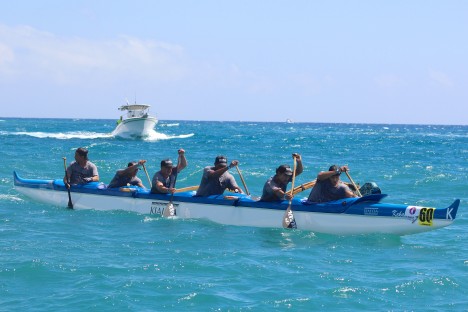 On the morning of the 63rd Molokai Hoe, Bozo Dudoit scans the water for clues. The sluggish clouds and sloppy ocean are less than promising to the veteran paddling coach and steersman.

“We were hoping for some bumps and I think it’s gonna be flat today,” says Dudoit. “But we’re gonna go out there and give it our best shot. We’re ready for anything.”

In two hours, Dudoit and eight other Molokai men will paddle a fiberglass outrigger canoe 42 miles across the Ka`iwi Channel to Oahu. The legendary race, first won by a Molokai crew in 1952, is the longest and most grueling of the season.

“We’ve never really been challenged like this before,” says paddler Ekolu Kalama. “Our longest race this year was 28 miles. My hands will be all blisters by the end.”

Ninety-three crews from all over the world gather on the shores of Hale O Lono Harbor for a pre-race blessing. While Molokai paddlers are scattered amongst the teams, Wa`akapaemua Canoe Club is the only full crew to represent the host island.

“It’s our tradition for us as Hawaiians,” says paddler Clancey Wright. “Molokai is only one small island so it’s good for us to represent and bring Molokai out in these kinds of big events.”

With the sound of a horn, the race is on. The sky is gray and the ocean is choppy, but the Molokai guys are in good spirits.

It’s Kimball’s job to call the water changes, the mid-race substitutions. The crews make their first water change at 8:45. Dane pulls the boat ahead of the canoe, and three paddlers plunge into the water. When the canoe catches up, the designated paddlers tumble out on one side while their replacements hoist themselves in from the other. It all takes less than a minute.

“It’s when you can lose yard or gain yard on another crew,” Kamoana Spencer explains. “There are plenty guys we passed during changes. The cleaner, the better.” 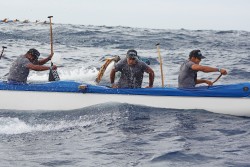 Kamakou Mariano leaps into the boat during a water change. Photo by Colleen Uechi.

An unpleasant surprise awaits the paddlers in the water: jellyfish. Despite the stings, they climb into the boat and shout encouragement to their peers, animatedly exchanging tips and pointing to canoes they plan to overtake.

The boys are still pumped, but they’re talking less after water changes, heaving themselves into the escort boat and wriggling across the floor to avoid using their burning arms. They never stop in the canoe, taking more than 60 strokes per minute, the pressure of the water on their paddles with each pull.

“Not in our favor,” says Heen of the weather. “The winds are going south. We’re trying to go west. We have to concentrate and slow down our stroke a little bit, feel the current more.”

Paddling the Ka`iwi Channel, says Dudoit, is not as simple as jumping in the canoe and hightailing it straight for Oahu. There’s planning and strategy that spans half a year and continues throughout the race.

Dudoit carefully watches the tide and wind in the months prior. He talks to friends on Oahu who paddle similar routes. He takes a map and plots an ideal route that the escort boat will monitor.

During the race, changes in stroke rate and direction must be made to adjust to winds, currents and surf. Part of his strategy also includes staying within a cluster of teams.

“When you’re out there by yourself, you get in one zone and you’re not really racing,” he says. “So we try to stick in groups. It’s a good theory to keep the team energized.”

Throughout the day, canoes slide right up to Molokai, urging them to up the tempo. The boys in the escort boat whoop and holler when Molokai pulls a full canoe length ahead of Hawaii Island crew Na Koa Kona, the 19th place finishers. For a pair of energy charged minutes, Molokai stays neck in neck with 14th place Waikiki Beach Boys before the Oahu crew eventually gets away.

The crew has trained for seven months, five days a week. With the exception of races, they don’t paddle on weekends “to keep peace with the families,” in Dudoit’s words.

Aside from their 54-year-old coach, the paddlers are all in their 20s and 30s. They’re carpenters, ranch workers, investors and surfers. Many have girlfriends or wives and kids at home. 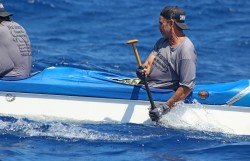 “For me, juggling family and work was the hardest part about paddling,” says Kansana, who has a four-year-old son and a girlfriend who also paddles. “It was more of a family commitment than an individual one.”

Heen points out that two hours of daily practice “is about the same amount of time most people spend watching TV or drinking beer,” but adds that he tries to clean the house more often to make up for the time away.

For Dudoit, it’s all about maintaining relationships. He tells his boys to settle concerns with each other before leaving practice and frequently asks paddlers how things are at home.

“Bonding is so important,” he says. “You cannot come and get in the boat with doubts in your mind. When you leave practice, everything is left on the table.”

If Molokai holds true to last year’s numbers—which they do—they’re down to their final hour of paddling. While the crews had earlier spread out in the middle of the channel, competition heats up as they converge on Oahu.

“Leave it all in the boat!” shouts Aiana. “Throw up if you gotta!”

Molokai is determined to hold its top 20 position, feverishly chasing crews ahead and holding off crews behind. After miles of messy waters, they finally gets a chance to surf some decent bumps. Reenergized, they plug away, motivated by one thought.

“Knowing that it’s the end,” says John-Russell Phifer. “That’s the energy, the push it gives us to finish.”

Molokai pulls into Waikiki in five hours, 39 minutes and 20 seconds—17th out of 93 crews. They’re greeted with lei and congratulations from Molokai residents who’ve made the trip over.

Every muscle is worked, every gram of energy spent, but all worth it for the guys.

“It’s our culture and we just like to do it,” says Kamakou Mariano. “That’s pretty much one of our passions. Everybody from all over the world comes together and races this race. It was a good battle.”