Battle for the Belt 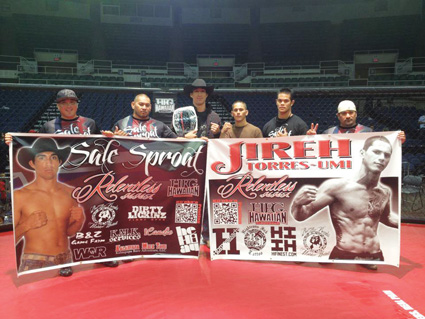 Molokai cowboy and professional mixed martial arts (MMA) fighter Sale Sproat came home from MMA event, Destiny: Na Koa, with the championship belt for the Pro Middleweight title around his waist. Sproat defeated Douglas Silva Moura, a student of famous Ultimate Fighting Championship (UFC) fighter Anderson Silva, who sat ringside for the fight on Saturday at the Blaisdell Arena on Oahu. Sproat, 185 pounds, won by technical knockout (TKO) within a minute and a half of the first round.

“This is the hardest I’ve ever trained in my life — I was well-prepared mentally and physically,” said Sproat. “I’m definitely happy with the way [the fight] went.”

This win brings Sproat’s professional MMA record to 3-1. He said he will continue to train every day to maintain his skill. He hopes to fly to Las Vegas later this month to try out for UFC’s Ultimate Fighter season 17.

Jireh Torres-Umi, who trains alongside Sproat with Molokai’s Relentless MMA, made his pro-debut at this year’s Destiny: Na Koa, fighting in the 135-pound bracket against Ian Delacuesta, who trains with 808 Fight Factory. He fought three rounds and lost by judge’s decision.