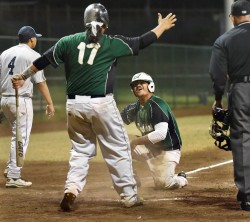 Molokai’s Ena Victorino is welcomed home by Kahanuola Alcon after a third-inning inside-the-park home run. Photo by Matthew Thayer of The Maui News.

The Molokai High School boys’ baseball team will be headed to the state tournament for the third year in a row after winning the MIL Division II Baseball Championship this past weekend at Maehara Stadium on Maui.

The Farmers outscored their opponents in the tournament 26- 1 and had solid pitching from their two aces, Nohi Meyer and Hanale Dudoit Enos.

On Thursday, they defeated Lanai 15-0 in three innings, and on Friday they defeated St. Anthony 11- 1 in five innings. Ena Victorino had a home run and a triple in the game against the Trojans, and all of his teammates also contributed to the successful weekend.

“I was just trying to keep my eye on the ball, just swing like the coaches said, quick hands to the plate,” said Victorino.

Head Coach Scott Rapanot was very proud of his team and said they are peaking at just the right time, adding there is a reason for that.

“It looks like everything is coming together for us, and it’s all because hard work pays off,” he said. “I tell the players all the time that it’s not how you start, it is how you finish, and all their hard work is paying off right now and their bats are really talking story.”

The team will get back to practice this week and wait to hear what their seeding will be and who they will play on Oahu May 7-9. The quarterfinal games will be played on May 7 at Hans L’Orange field, and the semifinals on May 8 will be at Les Murakami Stadium at 10 a.m. and 1 p.m. The championship game is scheduled for Saturday, May 9 at 4 p.m. at Les Murakami Stadium. The semifinals and the championship game will be on Oceanic cable TV.

Rapanot says they are looking forward to representing the MIL and Molokai at the state championships, and that it has been their goal all season.

“Now we head to the state tournament and we battle in there,” he said. “It has been our goal and our dream all year to win the state championship and bring home to Molokai another title banner to hang in the gym.”