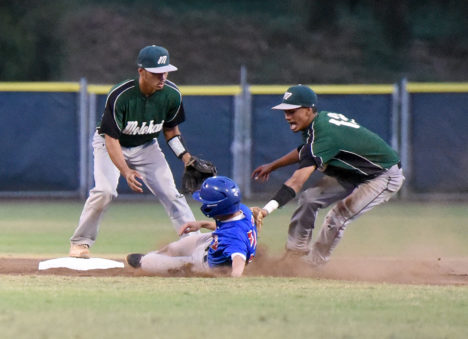 The Molokai High School Boys Baseball team won its fifth straight Maui Interscholastic League Division II Championship last weekend at Maehara Stadium in Kahului. The Farmers (10-1) beat Seabury (8-3) on Friday night in a marathon 11 inning game 10-9 to punch their ticket to this year’s state tournament on Oahu. Molokai also beat St. Anthony in the semifinal game 12-0 on Thursday to advance to the final.

Molokai has won 47 of their last 48 MIL games. The only loss was earlier this season to the Spartans. Seabury’s three losses are all to Molokai this year.

The Farmers and the Spartans battled for more than six hours Friday night before Nainoa Kaahanui was hit by a pitch with the bases loaded in the bottom of the 11th inning for the walk of win. The Spartans had scored four runs in the top of the eighth to take a 9-5 lead but the Farmers answered with four runs of their own to tie it at nine and continue the game.

Senior Kairos Torres-Umi says he and his teammates are playing well just at the right time.

“Our team is a band of brothers and we all depend on each other and each of us plays a part in winning games,” he said. “I’m glad that our team never lost faith even when we were down four runs. It was a great game and hats off to Seabury for that. Now it’s on to states and we need to take it one game at a time.”

Head Coach Ilika Kaahanui was proud of the boys’ determination.

“They never gave up,” he said. “Even when we were down runs in some inning they were able to play through and win it in 11 innings. It was an awesome game played by both teams. Our boys showed heart and persevered through and I am very proud of them.”

Ilika Kaahanui added the hard work is not over yet as they head to the state tournament.

“The championship prolongs our season as we were able to secure a spot for states,” he explained. “We have to work even harder to prepare in the next two weeks for the state tournament and will do our best to represent Molokai well.”