Wednesday, May 11th, 2022 By The Molokai Dispatch Staff 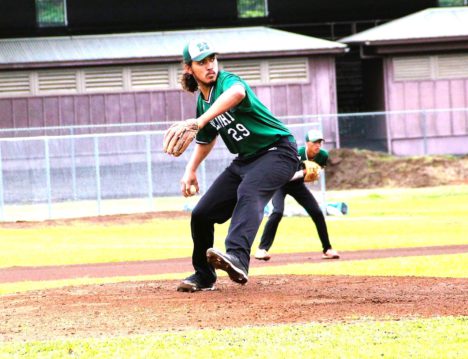 The Farmers Baseball team closed their undefeated season with two losses at the State Division II Baseball Championship in Hilo. On Thursday, the team played Damien Memorial School, with an 8-2 score.

“We battled and did the best we could do,” said Head Coach Keahi Rawlins. “Gavin [Ainoa] gave it his all on the mound and we made some crucial errors that hurt us. Effort and intensity I felt was there but mental mistakes and physical errors on both sides of the ball affected the outcome. Damien plays against top notch clubs and they played well hats off to them.”

Friday’s 6-2 loss was to Waianae High.

“We got off to a slow start on defense and was unable to climb back in the game,” continued Rawlins. “One bad inning was the difference. We had some unfortunate events that occurred and it could have been an emotional breakdown, but the boys hung in there and was able to play some good baseball to finish the game.”

Rawlins said he’s grateful for the supporters there to cheer them on, the team’s seniors for leading the way this season, as well as the athletic department, coaches and parents.