Baseball Player and Coach of the Year 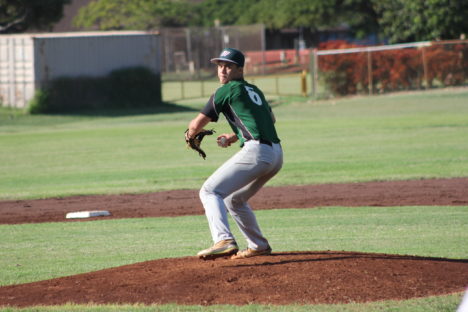 Molokai’s baseball team was recognized with top honors by The Maui News in their 2017 Baseball All-Stars. Senior Kairos Torres-Umi was selected as Player of the Year in Division II, while Head Coach Ilika Kaahanui was selected as Coach of the Year. Torres-Umi is joined on the all-star first team by seniors Aaron Rapanot, Kekaiakea Maliu and Jayden Dudoit- Tabilangan. Juniors on the first team are Nainoa Kaahanui, Kekaiomalu Adachi and Shraedon Naeole-Starkey. On the DII second team were junior Micah Calairo-Nakagawa and sophomore Chevy Augustiro.

Torres-Umi, who pitched a perfect game this season and led his team to a 5th straight MIL title, said he accomplished a goal he set for himself.

“Being named player of the year was an honor I feel great and thankful,” he said. “It was a goal I set when I was a sophomore and to accomplish it is awesome.”

The Farmers dedicated their season this year to his father William “Bill” Umi III and Torres-Umi admits it was a tough season emotionally.

“I wasn’t sure if I wanted to continue baseball after my dad passed but I did it for him and the whole season was for him and my mom,” he said.

Molokai is famous for its baseball tradition and Torres-Umi is thankful for that and wanted to especially thank his ohana Rethysia “Tici” and Nathan “Bubba” Horner for helping him throughout his baseball career, as well as Levi Horner Villa, who just finished his freshman year at Linfield Baseball.

“[They pitched at me] till their arms were sore and finding time to work with me and help me get better and I’m grateful for them,” he said.

Torres-Umi will now head to Eastern Arizona College to play baseball and is ready for bigger and better things.

“It’s bittersweet that baseball as a Farmer is coming to an end and I’m going to miss it but it’s time for bigger things,” said Torres-Umi. “But I’d like to thank the man above first and foremost. I plan to play baseball at Eastern Arizona College for these next two years and take it from there.”