Baseball Off to Bat with Wins 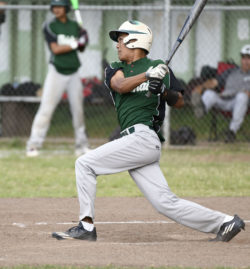 The Boys Baseball team got its Maui Interscholastic League Division II season started with two wins over St. Anthony on Maui last weekend. On Friday, the Farmers (2-0) beat the Trojans (0-2) 17-6 in five innings. Senior Nainoa Kaahanui was on the mound for the Farmers and got the win. On Saturday, Molokai got the win 7-3 behind senior starting pitcher Shraedon Naeole-Starkey. Molokai has won the last five MIL DII Baseball titles.

Molokai is getting a late start with their season after having no games in preseason this year and Head Coach Bradford “Ilika” Kaahanui is ready to get the boys in a groove.

“It was a rough start of the season but we were able to settle boys down and pull through against St. Anthony,” he said. “We expected a battle going into this weekend, and it was.”

Molokai will have to find their team chemistry in their league games this season.

“By not having any preseason, we are still getting a feel on our boys,” added Kaahanui. “Corrections will have to be made this week as we head to Lanai.”

Molokai will travel to this week for three games against the Pine Lads. Molokai’s only home games this year will be on April 20-21 against Seabury. The MIL Baseball Tournament is on Maui April 26-28, and states are on Oahu May 8-10.