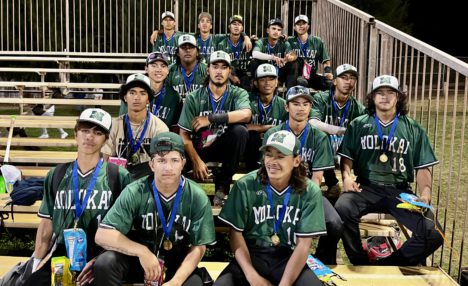 The Farmers were named Maui Interscholastic League Division II champions last Friday after an unbeaten 8-0 season. They cinched the title with a 7-0 win over Seabury Hall in the MIL tournament final at Maehara Stadium in Wailuku.

Head Coach Keahi Rawlins was happy for the victory but is keeping his eye on the next prize: states.

“Coming home with the gold and a couple more wins,” he said Friday. “These boys all work hard and I’m happy for their accomplishments. We still got a lot of work ahead and we got to get working come Monday to prepare for states. Mahalo Molokai for all the love and support!”

Ho’olei Arce pitched a complete-game one-hitter with nine strikeouts and two walks, while nursing a sprained wrist in his glove hand from the previous day’s game. 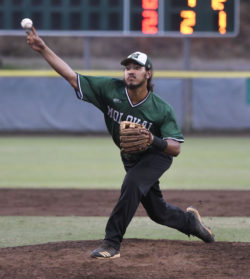 “Another stellar outing on the mound for Ho’olei. He has been tuff on the mound all year for is and tonight was no different,” said Rawlins. “It was his longest outing and we planned on extending his pitch count to see how he does later in the game, and he surpassed my expectations with a strong showing… [He] pounded the strike zone and fielded his position perfectly.”

On Thursday, Molokai defeated the Hana Dragons in five innings 12-2.

“Boys played tough and put-up crooked numbers every inning to get the W,” said Rawlins. “Tested Reyn [Raguindin] with the start on the mound and couldn’t ask for much more from the young righty. He got off to a good start and battled through three innings of work. Saven [Saven Kaahanui] was lights out! He been wanting to pitch all season and didn’t disappoint when given the opportunity fanning all six of his batters. Combined no hitter will always give you a shot, proud of them.”

With their title win, the Farmers claimed the MIL’s only state tournament berth and will head to Hilo May 4-7 for the DII games.