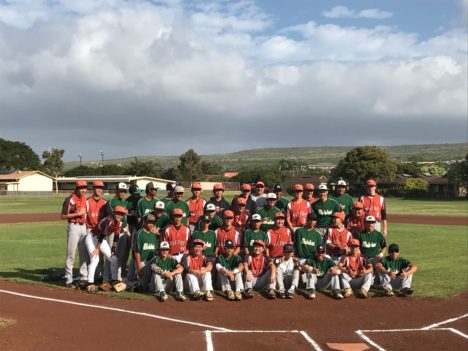 On Friday, the Wolfpack defeated the Farmers 4-1. Saturday the two teams played a doubleheader and split the two games. Pac 5 won the early game 5-4 by scoring the winning run in the bottom of the 7th inning. Molokai came back to win the afternoon game 5-1. On Sunday morning, the teams combined to play a goodwill fellowship game to close the tournament.

Hawaii baseball legend Sid Fernandez — a member of the 1981 Kaiser High School state championship team and later drafter by the LA Dodgers — attended the game to watch his son play for Pac 5. He also serves as a pitching coach for the team. Fernandez went on to be traded to the Mets, where he won the World Series in 1986, and also played with the Phillies.

“The people [of Molokai] are very nice,” he said. “They treat us like kings here. Unbelievable!”