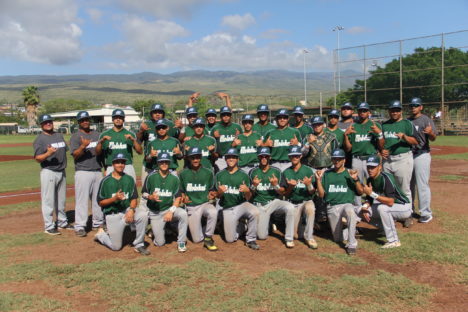 The Molokai High School Baseball Team started their 2017 MIL DII season with home wins over St. Anthony last weekend at Duke Maliu Park. On Friday, the Farmers defeated the Trojans 17-0 in three innings behind the perfect game pitched by senior Kairos Torres-Umi.  Aaron Rapanot and Nainoa Kaahanui were each 2 for 2 at the plate as the Farmers scored all 17 runs in the bottom of the first inning. Rapanot had four RBIs and scored twice, while Kaahanui had a triple, two RBIs and scored twice. Kekaiakea Maliu scored three runs, while Torres-Umi, Trenton Takata and Royden Abafo all scored twice. 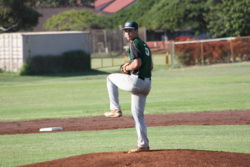 Torres-Umi’s father, William “Uncle Bill” Umi III, had passed away earlier in the day in San Diego surrounded by family, and his son pitched a perfect game that afternoon for his dad.

“Friday all I thought about was my dad and I picked a spot in the stands and I imagined my dad was there,” said Torres-Umi. “I miss him so much but I know that he’s with me, I know he’s guiding me through this season and me and my team are dedicating this season to him.”

Head Coach Ilika Kaahanui knew it was going to be a special day last Friday.

“We started Friday’s game conservative at the box and we were able to get a bunch of hits with runners on to get a comfortable lead,” he said. “Then with Kairos on the mound and his defense behind him was able to get the strikeouts he needed and made some plays for outs resulting in a perfect game pitched.”

Ilika Kaahanui has coached Torres-Umi for many years and was proud of his pitcher.

“Dealing with grief and facing adversity while making a commitment to the team and honoring his dad’s wishes: This is a strong young man on a mission,” he said.

Torres-Umi is appreciative of all the support from his community.

“The amount of support I have had from everyone is tremendous,” he said. “I’m blessed to have so much family and friends in this community…. [My dad is] with God now but he’s always watching and looking out for me and I know he’ll help me through the season.”

On Saturday, Nainoa Kaahanui took the mound for Molokai and got the win as the Farmers won 15-0 in five innings to put their record at 2-0 early in the DII baseball season. The Trojans are 0-2. Kekai Adachi was 2 for 3 with a triple and 2 runs scored and an RBI. Kaahanui was 2 for 4 with two doubles and three RBI’s while Jayden Dudoit-Tabilangan had a solo home run. Maliu was 1 for 2 with a double and three runs scored. Rapanot also had a triple with two RBIs.

Torres-Umi had seven strikeouts on Friday and Nainoa Kaahanui had five strikeouts in four innings pitched on Saturday.

Molokai travels to Maui this weekend for two games against Seabury at Eddie Tam Field in Makawao.