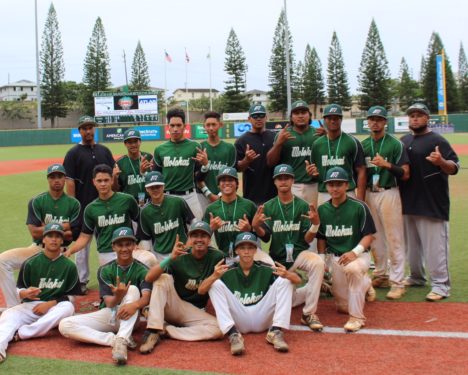 The Molokai Farmers Boys Baseball team came home with a fifth place showing at the Wally Yonamine Foundation 59th Annual HHSAA State Baseball Championship on Oahu last weekend. The Farmers picked up two victories after dropping their first game to the Kauai Red Raiders 4-3 in eight innings. Molokai came back with victories over Radford 3-1 and then advanced to Les Murakami Stadium on the campus of the University of Hawaii for the fifth place game and beat Farrington 10-4.

Kauai ended up winning the State Championship by beating Damien 5-4.

Molokai was coached by Head Coach Ilika Kaahanui, along with his assistant coaches Kenny Adachi, Milton Loo and Armondo Habon. The Farmers were led by seniors Kairos Torres-Umi, Aaron Rapanot, Kekaiakea Maliu, Jayden Dudoit-Tabilangan and John Michael Mokiao-Duvauchelle. Torres-Umi pitched the first game against Kauai while Dudoit-Tabilangan pitched a complete game victory over Radford, and junior Nainoa Kaahanui pitched a complete game victory over Farrington. Junior Kekaiomalu Adachi played well also, along with his teammates, and leads a great group of players for next year.

Kenny Adachi was proud of his players for competing at the state level with good competition.

“Our Molokai boys fought hard, and really battled out on the field over the weekend,” he said. “We started the tournament against a very talented Kauai team who was able to edge us out in the end, 4-3, in extra innings. Kauai than went on to win the State tournament which just goes to show the level of baseball we were up against, and able to compete with.”

The Farmers came back with great pitching, hitting and defense in the last two games.
“We were able to finish the tournament strong with a pair of wins, including a win in Les Murakami Stadium which was a great opportunity for our boys,” said Kenny Adachi.