Baking for the Masses 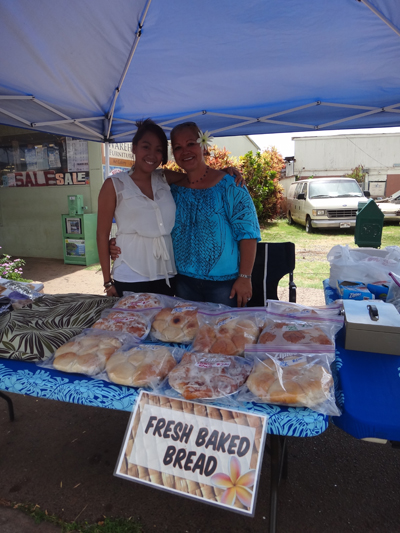 By 6 a.m. on most weekdays, Valerie Dudoit Temahaga already has her booth set up along Ala Malama Ave. in Kaunakakai and the smell of fresh-baked goods is wafting down the street for early-morning workers who come from as far as Molokai’s east end. Since the temporary closure of Kanemitsu Bakery’s operation earlier this year, many Molokai residents have turned to Temahaga’s pastries as a source for their baked goods.

“When the bakery closed, people asked me to bake and sell here,” said Temahaga, who started baking over 30 years ago. “I never expected it to get this big though. It was really exciting for us when people started buying from our back doors [at Lanikeha] like they did at hot bread lane.”

She has been selling from her booth in town since July. Her supply of about 100 rolls per day usually sell out by 9 a.m.

The rolls come packaged modestly in large Ziploc bags, with flavors including pesto, coconut, butter and her most popular, cinnamon. They range from $6 to $7 per package of seven rolls. She also sells manapua, coconut biscuits and other pastries.

Temahaga’s process begins the night before. Every Sunday, Wednesday and Thursday night, she and her team of three can be found in the kitchen at Lanikeha Center in Ho`olehua, a Department of Health (DOH)-certified facility where food products can be prepared for commercial sale, from 4 p.m. until 11 p.m. or later. Her team – husband Kone Temahana, sister-in-law Norma Dudoit and cousin Tori Maliu –prepare the rolls to sell the next day. Most nights, people wander in around 8 p.m. and ask to buy freshly baked breads, which Temahaga is more than willing to offer.

Temahaga said she bakes every night. When she doesn’t bake for commercial purposes, she is catering rolls for family, friends and her hula class. She developed the recipe for her original cinnamon rolls from a basic school recipe, adding in her own ingredients as she went along.

“I don’t really have a secret ingredient,” said Temahaga. “I don’t hide anything, I’m more than willing to share with anyone who wants to learn… if you want to learn, come help us out and learn how to make your own bread.”

Temahaga said she is currently in the process of developing recipes for healthy rolls using whole wheat and grains. 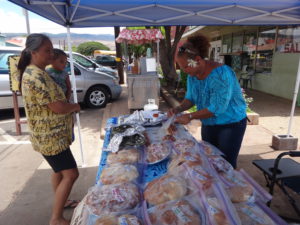 Val sells in town on Mondays, Thursdays and Fridays from 6 a.m. until they sell out (usually 9 a.m.). Photo by Leslie Hibner.

Temahaga said she would like to someday operate from an actual bakery, but for now, she likes selling locally because it is easier to manage things on a smaller scale fiscally. However, the time to enjoy her pastries on Molokai may be numbered, as Temahaga said she and her husband are considering moving back to Tahiti, his homeland, in July of next year.

In the meantime, you can find her and her baked goods at her booth in town, from 6 a.m. on Mondays, Thursdays and Fridays; at the Saturday market from 6:30 a.m.; at Lanikeha Kitchen from 8 p.m. on Sundays, Wednesdays and Thursday; and at Kumu Farms, where she delivers every week.

8 Responses to “Baking for the Masses”