Bakery Remains Closed After Another Inspection

Kanemitsu Bakery’s ovens will remain cold after failing to pass another Department of Health (DOH) inspection last Wednesday. Following a complaint in June alleging foreign substances were found in the baked goods, the bakery’s permit was suspended pending the completion of a lengthy list of sanitation improvements. Bakery owner George Kanemitsu called for Wednesday’s inspection to verify the changes had been made. While many improvements had been completed, the state inspector found that some of the necessary changes were still lacking. 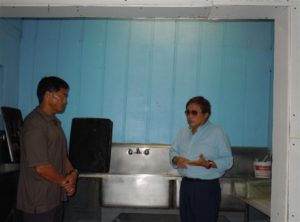 “I really thought they would let me open up and fix it as we go along, but it didn’t go like that,” said Kanemitsu. “Anything that I do is not going to be good enough. I’m scared they [DOH] are going to come up with new things.”

Rep. Mele Carroll and Maui County Councilman Danny Mateo, along with many concerned community members in support of the bakery, were also present.

“I came here to support Kanemitsu’s and I still support them,” said Carroll. “There have been a lot of improvements from the last time I was here.”

“Unfortunately in my opinion, it’s not completed,” said Kagawa, noting an area of uninstalled drywall. The area was completed later that, day according Kanemitsu in a later interview. 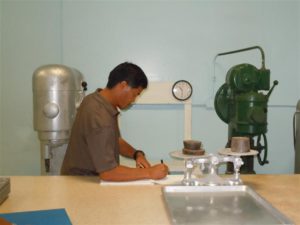 The inspector also noted uneven and rough floors, which he said would allow flour to get stuck and attract pests, shelving that had been covered with taped contact paper rather than being sanded and caulked, and cracks in the walls. As he walked around the building’s interior, he referenced the list of improvements that had previously been agreed upon by the DOH and Kanemitsu.

“I am here to verify that the checklist was completed because [Kanemitsu] called us to say it was completed,” said Kagawa. “Our intent today was to open [the bakery] up [by reinstating the permit].”

Community Support
On-looking community members were not convinced of the DOH’s intent.

“From what I saw…first hand, the decision wasn’t fair,” she said. “I thought it looked good enough to open and [the bakery] could work on other things with a time frame through the DOH… Yes, the building is old, but a lot of hard work went into it.” 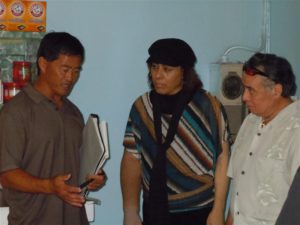 “Personally, I’m disappointed,” he said. “I thought with all the work they did, they [would pass inspection]. I always feel it’s the government’s position to help these businesses — we just saw an example of that not happening.”

Many of the concerns revolved around the anonymous public complaint that was received in June, alleging “insects and foreign substances were found in bread rolls purchased from Kanemitsu Bakery,” according to a DOH press release.

Kagawa said it is standard practice for DOH officials to make an onsite visit after a complaint is received.

“Sometimes an allegation is made and we find no evidence to support it. But upon inspection, we found it was conceivable [through visual sightings of rodents and insects.] If we came over here and found no evidence, the permit wouldn’t have been suspended,” said Kagawa.

Community member Carol Kanemitsu said she understands the legal ramifications for the bakery as well as the DOH.

To a fellow resident who came out in support of the bakery she explained, “How would you feel if your wife got murine typhus [usually spread through rats] and you want to sue the bakery? …The DOH is trying to protect [the bakery] from that,” she said.

A Long History
Carol said she also knows how difficult it can be to work with aged structures.

“I know how hard it is to take over an old family business,” said the co-owner of Take’s Variety Store, explaining the work she had to put into the building when she inherited it. 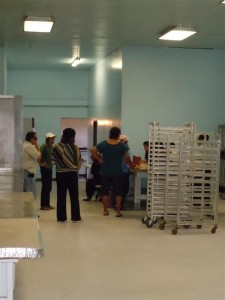 For many, Kanemitsu Bakery’s history is part of what makes the business so valuable.

“This is a 75-year institution,” said Mateo. “People like me remember George’s mom and dad who had hearts bigger than this entire island. We’re supposed to be keeping businesses open and asking them what can we do to help [instead of shutting them down].”

But despite the bakery’s long history of serving the community with its famed baked goods, the business also has a history of health violations, according to the DOH.

In 2000, the bakery was fined $90,000 for sanitation violations, though Kanemitsu said most of those fines were eventually waived. After a routine DOH inspection in March of this year found unsanitary conditions, the bakery was again fined $90,000. At that time, their permit was temporarily suspended for three days, during which time major violations were corrected and the DOH allowed the business to continue operation.

Kanemitsu, Pule and other community supporters said it seemed like DOH officials keep finding additional violations, and even though the bakery was allowed to continue operation in March, the June inspection found new problems.

Cathleen Shimizu-Sakamoto, the Molokai DOH inspector who completed both inspections, said that’s not the case.

“It’s not like we’re coming in trying to get them for more things.” She said all the same issues were noted in the March violations, but at that time were not considered as major as other concerns.

“The complaint highlighted the severity of the problem,” she explained, saying the June inspection put more focus on how rodents were entering the building, noting the lack of window screens and doors, and holes in the walls at the time.

The Next Steps
Moving forward, Kagawa said the list of agreed-upon changes still stands, and whenever Kanemitsu believes he has completed them, he can call the DOH again to have inspectors verify their completion.

Kanemitsu said contractors are continuing to work in the bakery, but he is unsure when or if the facility will re-open.

“It’s not like we’re going to waste all our money and time in here just to close it down,” she said.

In the meantime, the business’ restaurant remains open, operating out of a separate, approved kitchen.

Kanemitsu is also pursuing the possibility of baking his bread in Honolulu.

“I need to have some income,” said Kanemitsu, noting great financial loss from the so far three-month permit suspension.

“We’re looking for a win-win situation,” concluded Rep. Carroll. “The bakery gets to open, the safety is addressed and everyone gets to eat bread.”

2 Responses to “Bakery Remains Closed After Another Inspection”