Back to School Brings Big Changes 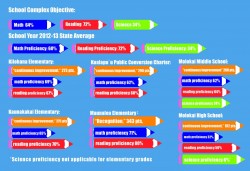 The graph above depicts HSA proficiency scores for the state and Molokai’s K-12 as well as their overall Strive HI scores for the 2012-13 school year. Click to enlarge.

The school bell has rung, the 2013-14 school year is underway, and several changes are in effect for Molokai’s K-12.

In May 2013, the DOE received federal approval to waive national No Child Left Behind (NCLB) criteria in order to better fit the needs of Hawaii schools.

The strategy holds schools accountable to achieve multiple standards to measure progress and college and career preparedness. It then places schools on a grading scale each year based on performance, achievement growth, graduation rate, and absences.

During the 2011-12 school year, Hawaii State Assessment scores were the only measures of student success. The projected Annual Yearly Projection (AYP) required the state’s schools to reach a math proficiency of 64 percent and a reading proficiency of 72 percent.

The state scored an average of 59 percent in math and 71 percent in reading and several Molokai schools were unable to meet those goals. However, because Strive HI takes multiple variables into account to measure growth and achievement, Molokai schools have been able to reach goals, placing them in higher standings.

For Molokai, Maunaloa Elementary School received recognition, earning 343 points out of a 400-point scale. The school was the only one in Maui County to receive recognition, which represents the top five percent of schools statewide, according to the DOE.

“Our staff was very happy to hear the news,” said Maunaloa Principal Joe Yamamoto, via email. “Student growth requires everyone—parents, students, school, and community—working together for the benefit of each student.”

“Overall, the 290 is respectable but we know that we should constantly strive to do better,” said Kualapu`u Public Conversion Charter School Principal Lydia Trinidad of her school’s score.

The award was part of the DOE’s Strive HI campaign to transform Hawaiian education, made possible through the state’s Race to the Top (RTTT) federal grant received in 2010.

The school was rewarded a $12,500 grant, which was used to provide classrooms with 45  Chromebook laptop computers this year.

“It allows our teachers and students to integrate technology into everything they do,” said Stevens. “With new college-ready standards, those technology skills are fundamental.”

Stevens said the laptops are utilized by grades three through six in addition to Mac laptops, a desktop computer lab, and 35 PC laptops donated last year, which are currently available to students.

The bottom line, Stevens said, is that all Kilohana students have 1:1 access to technology utilizing a variety of platforms.

For Kaunakakai Elementary, they are experiencing the after-shock of their five-year 21st Century Grant ending last year. The grant was used to provide after-school classes and tutoring for math, reading, and robotics. This year, the blow affected some school subjects.

“We cut back a lot of class offerings especially in the music and arts area,” said Principal Janice Espiritu. “Our priority was to maintain academic offerings in reading and STEM [science, technology, engineering and mathematics] activities.”

Kaunakakai introduced a new STEM coordinator position this year, filled by fifth grade teacher Kawika Gonzales, who will work with a committee to build more STEM learning opportunities for grades pre-K through six.

Student enrollment is up at the school as well.

“The increase has been gradual each year but this is the first year in a long while that we now have three Kindergarten classes,” said Espiritu, crediting the increase to more families moving to the Kaunakakai area.

Cultural and Physical Education for Kualapu`u

Last school year, Kualapu`u Public Conversion Charter School created a Physical Education (PE), Health and Wellness Committee. Their goal is to develop and strengthen the school’s curriculum through physical education and wellness, including communication, collaboration, critical thinking, and creativity, according to the school’s May newsletter.

As part of the committee’s plan to improve the PE program, they began the 2013-14 school year by combining PE with `Ike Hawaii, a program that teaches Hawaiian culture, history and values, forming a new daily program called Pu`olo, or “package,” according to Trinidad.

Pu`olo teacher Marshal Joy said the program focuses on a value each week and connects them with physical activity.

In one example, the class will run and chart their progress on a map of Molokai, said Joy. Once they reach certain points on the map, the students will learn about the area’s historical significance, which keeps them in touch with Hawaii’s roots in a fun way.

“We’re moving away from games and moving towards skills and techniques to play the sports right,” said Link. “We’re also teaching about getting along together, social skills, and behavior skills.”

For Maunaloa Elementary School, attendance has been a struggle in the past and present. Last year, the school’s student attendance rate was 94 percent and this year the state’s goal is 95 percent, said Yamamoto.

Despite the school’s outstanding Strive HI results, Yamamoto said he believes that the new standards will be a challenge for his school because of its focus on chronic absenteeism. That term refers to the number of students with 15 or more absences versus student attendance rates, which is the average percentage of all students in each school.

Yamamoto said enrollment is another challenge facing the 2013-14 school year.

“We are anticipating an enrollment decrease from last year, which will mean a loss in funds,” he said. “Any reduction in funding will affect what we can provide in way of additional personnel support, classroom supplies, etc.”

The school was also recognized as having the second place STEM program in the state and had the highest attendance rate of any DOE middle school in Hawaii.

“Whatever goal we set for our students, and at whatever level we ask them to perform at, they exceeded,” said Davidson.

There is a persistent need for additional funding to offset costs of sending students off-island to participate in county science fairs and competitions, said Davidson. However, through fundraising, grants, and contributions from local businesses, the school can fulfill the needs of its students and present a high-quality program.

“Our goal is simply to be the best middle school in the state,” said Davidson. “We believe we have the students, the staff, and the community to make that a reality.”

Molokai High School (MHS) has been preparing to start on the right foot for the standards that are in affect this year and in the future.

Last spring, MHS Principal Stan Hao said the school prepared students for this year’s changes by reminding them that they are here for an education and should be ready to learn. This included wearing the school uniform and student IDs, excluding use of profanity while at school, and maintaining 100 percent participation throughout the day.

“Abiding by these priorities will prepare them to address their studies now and prepare them for future endeavors,” said Hao.

Though this school year is bringing Molokai teachers and students different standards, enrollment changes, new staff positions, and program and technology introductions that have set goals and challenges at new heights, local principals agree that 2013-14 is starting on a good note.

“We like what we have seen in the first week of school and hope this will continue,” said Hao. “Your children are doing a great job; keep up the good work parents.”