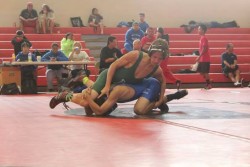 Molokai wrestlers Saydee Makaiwi and Kui Han repeated as champions of their divisions for the second week in a row. Last Saturday at the Farmers’ second meet, Makaiwi took the girls’ 138-pound weight class, while Han won the boys’ 285-pound title over Lahainaluna’s Connor Mowat, who recently went undefeated at the “Battle for the Belt” wrestling tournament in Temecula, Calif.

“Both Kui and Saydee have matured in their skills, and both are working hard in practice,” said Head Coach Randy Manley.

Three Molokai boys had second-place finishes: Caele Manley (113), Rayden DeKneef (152 B) and Jordan Boswell (170). Kailaoe Cabanting, who won the 117-pound division in the Farmers’ first meet on Jan. 17, took second on Saturday, as did Sierra Pico (122).

“We’re still adjusting and fine tuning,” said Manley of his relatively young team. “… Against the competition’s freshmen and first-year wrestlers, our kids are doing very well.”

The team’s next meet is on Saturday on Maui.