For years, Molokai businesses have been supported by the use of containers. A handful of entrepreneurs in Kaunakakai run their businesses solely out of the metal structures, while others depend on them for storage overflow. However, county law requires containers to have a building permit, among other conditions, and many businesses are in violation. Now, with a recent crack-down on enforcement, some businesses have to move or close shop.

Growing up on Molokai, Angela (Ellertson) Carpenter learned hula as many young girls do. Now, where she lives in Utah, she is taking hula to a whole new level – in her words, a “fitness craze” called Hot Hula.

The fitness class is to hula what Zumba is to Latin dancing. Hot Hula strengthens the muscles through dance movements from the Pacific Islands, with a hip hop flare. One-hour classes boast full body workouts, with hip motions rooted in Tahiti dance and arm movements drawn from hula. Workout soundtracks include Polynesian drumming and reggae beats.

“We are bringing a part of Polynesia to Utah one hour at a time,” said Carpenter.

Hot Hula does not teach halau-style dances but uses hula as a basis for fitness, she said.

Raised in Ho`olehua, daughter of Joel and Laura Kahee and granddaughter of Cissy and Hank Ellertson, Carpenter graduated from Molokai High School in 1998 and moved to Utah a year later.

There, she became one of the teachers that first brought Hot Hula to Southern Utah. The fitness program was developed by Anna-Rita Sloss, a California-based fitness instructor with Samoan heritage, who has lived in Samoa, Hawaii and Fiji. Sloss teaches master classes to certify instructors in Hot Hula.

Carpenter said she learned a lot from being raised on Molokai, and appreciates where she came from.

“It’s mostly the spirit of love and acceptance I learned that’s helping me…” she said. “I’m trying to bring a little bit of Molokai to everyone I meet – it all comes back to the aloha spirit.”

To Molokai’s youth, Carpenter advises to aim high and don’t limit your aspirations.

“Being from a small place does not mean that you can only accomplish small things,” she said.

The wharf was relatively empty and quiet at the Safari Explorer’s last port call to Kaunakakai last Tuesday, with only about a dozen residents holding protest signs. For that, officials thanked Molokai, and said it will be the last time a security zone is enforced for the yacht’s dockings through May, if all goes smoothly.

“We thank the community for showing the correct amount of balance at the pier [on Jan. 21],” said Department of Land and Natural Resources (DNLR) Chairperson William Aila. 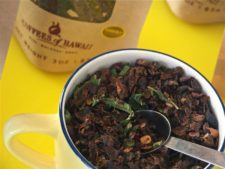 Herbal tea made from the dried fruit of the coffee plant is a Molokai product that’s spread its wings over the past two years. Originally produced by Coffees of Hawaii (COH) in Kualapu`u, the business has now been sold as Teas of Hawaii to COH employee Jessie Ford, who initiated the product’s development on Molokai.

“Tea is a passion and has been a dream of mine since I discovered it in my early days of college. I am very excited for this new company and adventure,” said Ford in a COH press release last week.

“Much of the state’s agricultural infrastructure is decades old,” said Russell S. Kokubun, chairperson of the Hawai'i Board of Agriculture, in a press release from the governor. “…It is important to maintain and upgrade them and keep them in service to Hawaii's farmers, growers and ranchers, now and for the future.”

Molokai students have proved themselves to be some of state’s brightest minds. Seventeen Molokai High School students and 15 Molokai Middle students represented the island at this year’s Maui Schools' Science and Engineering Fair on Maui two weeks ago – and they returned laden with awards.

MHS senior Moriah Jenkins won the event’s top honor for developing a myoelectric prosthetic limb for dogs. She will represent Hawaii at the Intel International Science and Engineering Fair in Pennsylvania this May -- marking the first year a Molokai student has qualified for the international competition.

Where Can I Find the Paper!?

Many of you (ourselves included) are still adjusting to our new distribution schedule. After increasing our print run two weeks ago, it’s still not as easy as we would like to get ahold of an issue of The Molokai Dispatch.

One of the frustrating challenges we’ve faced is keeping up with the 50 or so locations we currently deliver to. After much deliberation, we’ve decided to limit drop-off sites to our highest-traffic locations, with preference to advertisers. This change will allow us leave larger quantities of papers in places you are most likely to frequent. 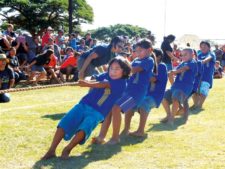 Hundreds of competitors of all ages gathered last Saturday to test their athletic skill and celebrate the 30th annual Ka Molokai Makahiki – an ancient tradition honoring Lono, the god of peace and fertility. During this four month season – usually from October through February – war was forbidden, or kapu, on all islands. Offerings from the harvest were made to Lono, and everyone joined in athletic games.

A half-hour television special illustrating the importance of Hawaii’s watershed and its protection will be airing on local stations this month and next. The show, produced on behalf of the state Department of Land and Natural Resources (DNLR) was written and directed by Molokai filmmaker Matt Yamashita. Staring actor Jason Scott Lee, “The Rain Follows the Forest” is a journey to learn about the islands’ fragile fresh water supply, its connections to the upland forest environment, and the ways we can protect this valuable resource.

Firefighters battled brushfires in Kalamaula Sunday, with about 130 acres burned, according to officials. While fires blazed within 50 feet of homes, no damages or injuries were reported as of Sunday,  though Dispatch staff witnessed damage to at least one 40-foot storage container. The fire was reported just after 1 p.m., and was declared contained, though not under control, by 6 p.m. Firefighters stayed to monitor the area throughout the night, according to Lee Mainaga, fire service chief on Maui.

Twenty-eight firefighters responded, including five from Lahaina. Two helicopters doused the blazes from above, while tankers worked on the ground. The cause of the fire is still under investigation, as of Sunday.