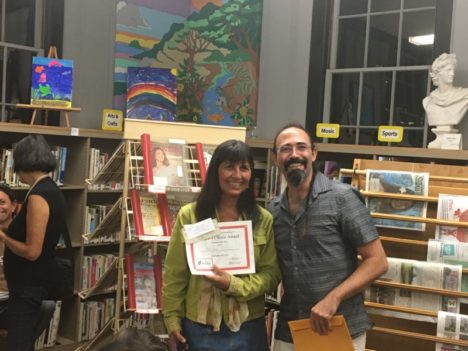 The fifth annual Molokai Arts Center Membership Art Reception was well attended on Wednesday, Nov. 30 at the Molokai Public Library. For the first time ever, awards were awarded by jurors, and recipients were given recognition during the reception. The audience was also able to vote for their favorite piece for the People’s Choice Award which was tallied and announced at the conclusion of the reception.

In the Keiki Awards category, Kayzen Keoho was the Scariest, Laule’a Ledesma was awarded for Excellence in Composition, Kailiah Gonzalez Chong received Excellence in Technique, Waihala’i Purdy Avelino was Most Unique and Waile’a Ward was named Most Creative.

The children each received an award certificate with their name on it plus a $5 gift card to Kamoi-Snack-n-go, donated by Molokai Drugs.

The show will be continue to be on display at the library through Dec. 14.