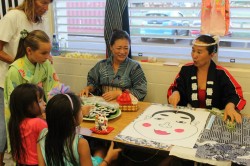 Kaunakakai Elementary hosted their first annual Cultural Night last Friday, complete with belly dancing and a balut eating contest, to showcase the cultural diversity within the community.  Parents and community members with many ethnic backgrounds from Fiji, Micronesia, Philippines, Russia, France, Mexico, Japan, Ireland, Turkey, and of course Hawaii, came together to expose students and their families to some of the cultures that make our community unique.

The goal of the evening was to educate and enrich the students by allowing them to “explore” other countries foods, traditions, and languages without even leaving the island, according to  coordinators of the event, Parent Community Network Center Coordinator Jennifer Whitted and Physical Education teacher U`i Kalani.

As they walked in the door, attendees received a passport for virtual travel. Each country was assigned a booth, and passports needed to be stamped at each country’s station. After a whirlwind of global travel with each passport fully stamped, families sat down for a complimentary dinner from Italy which was produced by the school cafeteria.

Students and families also got a sampling of food and culture at each booth. In Fiji, they tasted curry, while Japan featured sushi and the Bon dance. Turkish culture was highlighted through belly dancing and traditional musical instruments.  Mexico offered mini crispy taco bites and Micronesia had raw fish and squid, while attendees learned about lei making from Hawaii. Also, informative presentations from Russia, France, and Ireland, and lastly a sari sari store, and tinkling dance by the Philippines. Meanwhile attendees were serenaded with traditional folk songs by Bob Underwood.

What cultural night would be complete without a balut eating contest?  Balut is a Filipino delicacy comprised of a duck or chicken embryo that has incubated for 21 days then boiled.

Adults and kids alike came together to put their taste buds to the test, with only one being the victor.

While this was the school’s first event of its kind, organizers say they are already looking forward to hosting cultural night next year.

“It was everything I imagined it would be,” Kalani said.