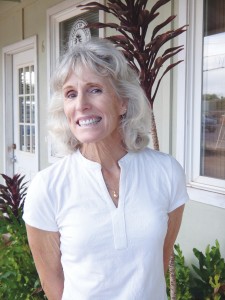 Along with the recent graduating class of 2012, athletic director Camie Kimball will also be leaving Molokai High School (MHS) to enjoy her retirement after 30 years of employment at the school.

Over the years, Kimball has held numerous positions within the education system on Molokai. She started out at the Alternative Learning Center at Keawanui, and then began work at MHS as student activities coordinator, physical education teacher, registrar and finally, athletic director, a position she has held for the past four years.

Kimball said her goal on Molokai has always been to promote a healthy lifestyle.

“When I moved here 34 years ago, you never saw people jogging on the roads,” said the California native. “But [now] you see people walking and jogging and riding bikes. I want to impress upon people a healthy body, healthy mind and the importance of staying active [not only] in high school [but also] in adult leagues.”

“She has been a huge mentor to me,” said assistant athletic director and girls volleyball coach Matt Helm. “I call her wonderwoman because she did everything and always has a positive outlook… She’s going to be missed.”

Kimball said what she will miss most about her position at MHS is working with the students and coaches.

“The coaches here bend over backwards for the kids in their program, whether it is helping with academics or pulling out pocket money for food,” said Kimball. “They would give you the shirt off their backs.”

Kimball said she is looking forward to spending time with her parents on the mainland after she retires officially at the end of June. She will also stay busy training for the World Sprints Canoe Paddling Race in Canada in August. Still, she assures students that she will return to MHS to watch their games.

The state Department of Education is currently looking for her replacement.