Aloha on the High Seas 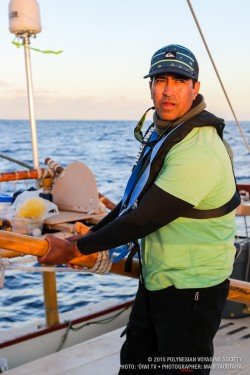 A handful of Molokai residents have been honored to be invited as crew on the Hokulea, a double-hulled voyaging canoe whose first journey from Hawaii to Tahiti in 1976 successfully replicated ancient Polynesian travel using traditional navigation techniques. The late Mel Paoa and Penny Martin began a long tradition of Molokai crewmembers, among them Kawika Crivello. He was one four local watermen to complete legs of the Malama Honua Worldwide Voyage, a 47,000-mile journey that will conclude in 2017. While not his first voyage, Crivello served as steersman on a leg across the dangerous Tasman Sea between New Zealand and Australia between April and June of this year. He sat down with the Dispatch to answer questions and share stories from his experience.

Dispatch: How did you come to sail on this leg?

Kawika Crivello (KC): I had sailed the Rapa Nui voyage and voyages before, and being with Bruce Blankenfeld and Nainoa Thompson [navigators and voyage leadership] for many years formed a bond on the wa`a and off the wa`a too. This particular voyage was the first voyage out of our Polynesian triangle, so when Bruce looked for specific people for the Tasman Sea, he wanted ocean oriented people so I was blessed to get the call on that leg. The crew was put together really well. There is unspoken aloha — everyone gets along with each other on and off the canoe.

Dispatch: What were your responsibilities on the canoe?

KC: My responsibility specifically was the education component — education specialist was my title. But on the canoe, a lot of the kuleana was steering the Hokule`a… for hours on end. It was a kuleana to take Hokule`a across safely and get her to Australia from New Zealand in one piece, across an ocean that she’s never been on before. It was an honor.

Dispatch: What were some of the challenges you faced?

KC: Because of the Tasman Sea, because of its reputation and being that time of year — during the transition to winter, we knew that we were going to come into some rough seas, which we did.

Before leaving Aurere, New Zealand, we stayed in a place where we could see the Tasman Sea. You could already see that it wasn’t the type of ocean we were all accustomed to. It was dark, cold, very windy. When we left, it was a sense of… not afraid, but a sense of the challenge ahead. And sure enough, four days into the voyage, we came across some very rough seas. We had never seen the ocean do what it did, the rhythm, the colors, the power of it. There were 20 to 25-foot seas, very windy, for a good couple of days. We took some hits. It ripped through the canvas, it knocked me down a couple times while steering.

It was during that time I learned one of the deepest lessons of that voyage that would manifest in many ways… of how to be one with it. It wasn’t so much trying to fight it, it was becoming one with it, becoming comfortable with it. In the middle of chaos, that you need to become most calm. Putting all that knowledge that was taught to me for many years by many elders, how to read the ocean, how to malama. I literally could hear the voices of my uncles that have passed, my family members, of people that are no longer here. I could feel them with me during that time. While I was steering, you could barely hear each other talk five feet away. This is the reason why they told our leaders not to go across the Tasman Sea at that time of year, let alone across the Tasman Sea in a double hull canoe. For our Kanaka Maoli, it became a challenge in a sense that we could become one with it and utilize the knowledge that our kupuna gave. We brought her across safely and when we reached there… it was beyond words. 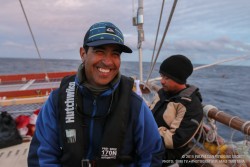 Dispatch: What is the significance of having accomplished that crossing?

KC: It brought back from the early days of Hokule`a, when scholars challenged that we as Kanaka Maoli just drifted to Hawaii, stumbled upon it. Through Mau Piailug and teaching of indigenous culture, we showed our ancestors were on point, it wasn’t an accident. The significance of us succeeding was a testament to their teachings, handed down from generation to generation.

KC: The Malama Honua message in itself is so powerful, taking care of our Earth, our oceans. With my personal experiences meeting the Maori people, aboriginal people, if there’s anything I truly know we gave that is a gift from Hawaii… we need to aloha first. That sounds so cliché, but that is the very gift that we have. That is definitely needed in today’s world. When we go to places, they say, “Wow, you guys are different.” I spoke of aloha and where I’m from and our children and what we live here on Molokai. They pick up on it very quickly. Their lifestyle is similar. Some places when I spoke of that, the high schoolers, the teachers, were tearing up, because love isn’t something… a male speaks about in New Zealand. You don’t show that. You don’t cry when you speak. That gift of aloha, there’s no barriers, it’s given with reverence. I know that’s why we were chosen [from Molokai]. When Molokai comes on the wa’a, we have a special aloha that we bring. It’s almost like aloha on steroids — I’ve been told that!

Dispatch: Were you treated differently coming from Molokai?

KC: Yes, it started pretty quickly when we arrived. In Aurere, one particular person you could tell was very hard, very Maori. He was out of prison, he rarely talks to anyone, and known in the area for being pretty rough. The last day before I left, he came down and sat with me in tears. He drove over 100 miles the day I left to tell me goodbye. His words were, “Bro, you’re different. The dongas, the birds, they follow you.” I look around and I see white-tailed birds. “They follow you. You’re from Molokai. They don’t follow the others, they follow you. Where you’re from, your kupuna are following you. I see them.” He starts crying and tells me thank you for breaking that part of him to aloha, to love.

I had shared with him about how being a man is not about this [flexes muscles] — that’s how I was raised. My dad was in and out of jail. I didn’t know, as I was telling him, that he’s a father and he’s been [abusing] his children. He asked me, “So as a youngster, did you love your dad?” I would share with him my feelings as a youngster. I was afraid of [my dad]. It’s hard to love something you’re afraid of.

It was a generational thing, he [from Aurere] felt that’s how he had to [raise his kids]. He was not accustomed to a man speaking to him of love. He was telling me stories and crying. He wouldn’t look at me when he talked. “I didn’t realize I was hurting my family.” [But after that,] he went to people and apologized. That aloha went into the cracks and crevices of darkness and abuse. That’s a gift from Molokai. That is from my upbringing.

When he left, the birds went with him. He looked, and they left with him. I said, “I don’t think it was mine, I think that was his.”

Here I am from Molokai, and to go to other parts of the world, to be on Hokule`a is such an honor to them. They look at it as a sign of hope, of light, an example of what we can do. Our two who started it, Aunty Penny and Uncle Mel… They’re the very foundation of our Molokai canoe genealogy. I wanted to do them proud.

The Worldwide Voyage is not over for me. But right now, Hokule`a is in the Indian Ocean. This is the leg from the beginning, we gave it the most prayers. This is the longest leg, the roughest as far as the unseen. We hope that people keep them in prayers.