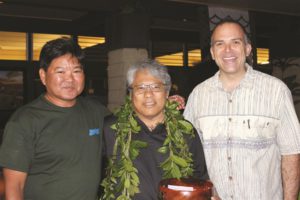 This year’s annual Molokai Earth Day celebration, hosted by The Nature Conservancy (TNC) marked the beginning of a new tradition –the “Malama Kuleana Honua” (Caring Responsibly for Earth) Honorary award. William “Bill” Puleloa, a recently retired aquatic biologist for the state’s Department of Land and Resources, was its first recipient. He was commended at Earth Day for his work with monitoring the conditions of Molokai streams, collaborating with local fishermen and researching the native honu, or green sea turtles.

“Bill has always been a resource and supporter to conserving our resources,” said Ed Misaki, TNC’s Program Director.

A video was presented at the celebration commemorating Puleloa’s achievements. “All humans are part of a shared resource,” Puleloa said in the video. “Our actions here on Hawaii – on Molokai even –do have an effect in other parts of the world…The more we respect our resources, the more special it becomes.”

“He knows a lot and we use him when young ones come in to the fish pond,” said community leader Mervin Dudoit Sr. “I learned a lot from him.”

Puleloa’s name will be the first to be engraved in the perpetual award- a large Milo wood bowl shaped by Victor Lopez of Kala`e. The committee hopes to fill the bowl with names of people who have shown as much commitment to the environment as Puleloa has, according to Misaki. 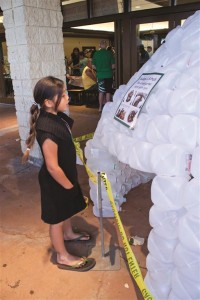 One of the event’s purposes has always been to introduce keiki to the importance of caring for the environment in hopes that someday they will want to be involved, said Misaki.

Youths from Molokai High’s Leadership Experience Opportunities (LEO) Club, a youth division of the Lions Club, volunteered to collect trash and recycling at the event. The high schoolers partnered with TNC and Monsanto to ensure rubbish was disposed of properly, according to advisor Julia De George.

“This is our aina we have to malama,” said Iolani Kuoha, a teacher at the Molokai Middle School’s Hawaiian Language Immersion Program. “I hope kids are proud of where they come from.”