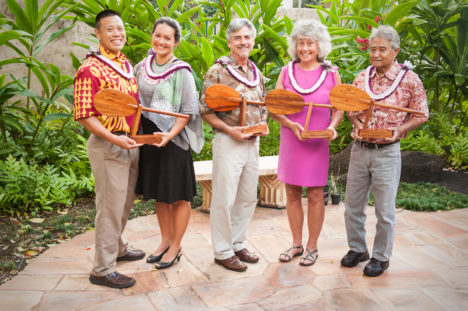 Molokai’s William Akutagawa, Jr. was one of five leaders statewide recognized for their commitment to making Hawaii a better place. The annual Ho`okele awards were given by Hawaii Community Foundation in their centennial year, and also marked the organization’s15th year honoring the state’s nonprofit leaders, according to a press release. The five honorees were awarded $10,000 for professional development and personal renewal.

“…We are honored to recognize these hardworking and inspiring individuals for their years of service in our community,” said Kelvin Taketa, CEO of the Hawaii Community Foundation. “While working in the nonprofit sector can be incredibly rewarding, it is also very demanding, which experiences high rates of burnout and turnover. By investing in our nonprofit leaders, we hope to bring about lasting change and build stronger communities in Hawaii.”

Akutagawa has spent nearly half of his life working in nonprofit organizations as a Native Hawaiian health and wellness advocate. He also serves as a board member for the Molokai Land Trust and instructor with the Hawaii Hunter Education Program.

The Ho`okele Awards, created and funded in partnership with the Wallace Alexander Gerbode Foundation, pays tribute to and strengthens the leadership in the state’s nonprofit sector by providing selfless leaders with an opportunity to renew themselves in their personal and professional lives, according to the release. Since 2002, $600,000 has been awarded to 63 nonprofit leaders statewide, the majority of which remain in the nonprofit and public sectors.

Ho`okele honorees are nominated by members of the community for their ability to think strategically, bring different groups of people together, inspire others, enthusiastically share their knowledge, and make a difference in Hawaii. The grant funding provided to honorees can be used for a variety of purposes and past recipients have said the recognition gave them new appreciation of their role as a nonprofit leader and afforded them them rejuvenation to continue on with their work.