Airport Construction on Hold in Kalaupapa 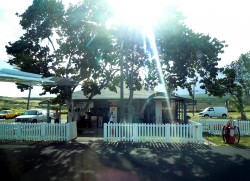 The Kalaupapa airport will soon be receiving a long awaited fire truck garage and services. However, with design discrepancies on where to place the garage and a strict timeline, the project might be delayed further, postponing safety services Kalaupapa residents seek.

A team of designers and engineers as well as representatives from the state Department of Transportation (DOT) and the Federal Aviation Administration (FAA) presented a design scheme to Kalaupapa residents Nov. 12, seeking public input and approval to move forward with the project.

In 2010, the Kalaupapa airport was scheduled to receive a fire truck and a team of Maui County firefighters who would rotate in 42-hour work shifts, according to Department of Health Kalaupapa Administrator Mark Miller. While the $300,000 fire truck currently sits and is operated daily for maintenance at the topside Ho`olehua airport, it still waits for a suitable garage to protect it from Kalaupapa’s weather conditions.

Initial design plans for the garage were presented to the community six months ago, which depicted the construction to be on the west side of the airport, separate from the terminal. However, because the FAA is funding the project, the agency rejected those plans due to location restrictions.

“We need the fire truck to be next to the terminal in order for FAA to provide funding for this project,” said Louis Fung, president of design firm, Fung Associates, during the community meeting. “There are several good points with this [new proposed] location so we want to ask the community to give us comments and support.”

The revised plans show the garage adjacent to the east side of the terminal with an open-air lanai extending from the east side of the garage. Plans also include renovating the terminal’s check-in counter, seating area, and bathrooms, as well as the airport’s wheelchair lift shed. Project designers were hoping to get the settlement’s approval at the meeting in order to keep within their timeframe and annual barge schedule to bring in the needed construction materials.

“For any projects to happen in Kalaupapa, we have to work with the barge schedule, which only happens once a year in July,” said Fung.

Fung said after his firm is able to finalize the design scheme, the DOT and FAA will put the project out to bid, select a contractor and get construction materials on the 2015 barge.

“Once the materials are delivered to site in 2015, we believe this project will be completed within 4 to 6 months more or less,” said Fung. “By Dec. 2015, the garage will be completed and the fire truck will be in place and in use. That is our target.”

However, the garage plans did not receive full community approval.

“If you come here on weekends or during the day, you’ll see our residents picking up their friends and families and waving hello and goodbye, watching them land and take off. That’s their thing,” said National Park Service employee Randall Watanuki, speaking personally. “By putting the garage here, you would be moving everything 20 feet farther away [from the parking lot] and you’re taking that away from them.”

Several other locations were proposed in various areas around the airport but were quickly dismissed because of FAA restrictions, inaccessibility to the tarmac, underground sewer lines, or indigenous burial remains.

Gordon Wong, FAA airports lead program manager, said he would return to his office and check the project’s funding eligibility criterion. He asked the community where they would prefer the garage to be built if they had the option.

“I think the community would prefer a location away from where it’s shown right now because that’s their main gathering area,” said Watanuki.

Patient residents attending the meeting, however, did not express an opinion about the project one way or another.

“This is a merry-go-round,” he said. “You’re pushing the date for when this project will be complete…because you can’t come to a decision.”

Watanuki said he appreciated Lai’s concerns about the project timeline, but that he needs to be understanding to the special circumstances of the Kalaupapa community.

“Everything done [in Kalaupapa] should be done with [the patients] in primary focus,” said Watanuki. “I understand we are on a timeline, and under FAA regulations, but we cannot forget the concerns of the patients and community. Of all places in the world, this is the only place that is theirs.”

Miller agreed and said he would present the proposed garage location to other patients and contact Fung with their feedback.

“While we sound like we all have different ideas of how things should be, we really appreciate you being here, we appreciate all your work, and we cant thank you enough,” Miller said to the project planners. “I just don’t want you to leave here today without knowing that we don’t do this without the largest amount of aloha and our interest for maintaining the legacy of our patients for years to come.”