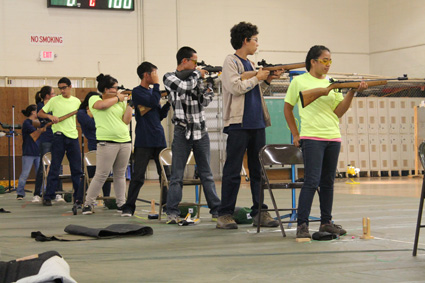 The meet started around 8 a.m. on Saturday, with MHS and St. Anthony shooting first while other schools were still arriving. Each shooter fires three rounds –one in a standing position, one kneeling and one prone, or lying down. The scores for each round is out of 100 points, totaling a possible score of 300 points for each individual shooter. Team scores are calculated by totaling the individual scores of each school’s top four shooters, with a maximum of 1,200 points.

St. Anthony ended up finishing first in the meet –the boys scored 927 and the girls scored 904. Molokai came in second, with the boys scoring 894 and the girls 870. MHS Coach Eddie Gorospe said he was happy with the results, because at the first MIL meet on Sept. 22, both MHS girls and boys came in fourth, so this was an improvement.

“The meet ran good, ran organized,” said Gorospe during the event. “Next year, hopefully we can get new guns, but [other than that] I don’t think we’d change anything.” 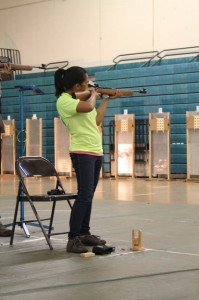 Some private schools like St. Anthony brought their own gun stands –each of which cost upwards of $200 –which help shooters rest the barrel of their guns while shooting in the standing position, according to Gorospe. Due to a more limited budget, MHS students shot without the aid of any stands. In fact, some MHS students are still shooting with original guns that have been used since the program’s inception 22 years ago.

That doesn’t stop the team from scoring, though. MHS Senior and team captain Mariah Kalipi led the girls’ finishing with an individual score of 246 out of a possible 300, the second highest of the meet just two points behind St. Anthony’s Jade Boren, who scored 248. Other top MHS scorers included Hope Will and Sabrina Curtis, who scored 229 and 221, respectively.

Trevor Takata led the scoring for MHS boys, placing third in the meet with 247. Team captain Michael H. Corpuz came in fifth with a score of 227.

The next Air Riflery meet will be at Baldwin High on Maui on Oct. 13.

One Response to “Aiming High”