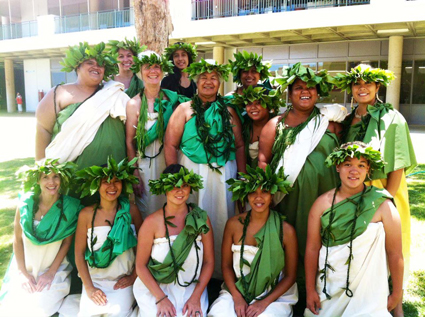 `Aha Wahine Kuhinapapa, a two-day women’s conference held at Leeward Community College, is designed to “inspire, in quire, invest and invigorate each other with `ike, aloha and kuleana”. This year’s conference was held from Aug. 17 to 18, where 14 Molokai participants included kupuna, students, mothers, daughters, health professionals and community members. With the success of the ‘Aha Kane, the intent of this conference was to reconnect women to their Hawaiian heritage.

“Native Hawaiian women have been gathering in smaller groups around their particular practices, but [it is important] to have one on a grander scale that dealt with larger issues that all of us as native Hawaiian women deal with –social, economic, health, educational and so forth,” said Mehanaokala Hind, co-coordinator of this year’s conference.

On the first day, kau ka la i ka lolo, protocol for the opening ceremony began at noon and each island presented their offerings for the ahu. The Molokai hui, led and prepared by Po’opua’a Kanoelani Davis, presented oli, hula noho, ha’a and ho’okupu. Mahalo to Kanoelani for her energy and aloha in organizing and preparing our group for this important and powerful event.

“Being a native Hawaiian woman practicing traditions passed down from generation to generation is not an easy task, although it must be done,” said Davis. “The knowledge that there are hundreds of women who have the same struggles brings meaningful light that we’re not alone.”

Workshops were held throughout the two days, including topics such as hula, la’au lapa’au, lomi lomi, ho’opono pono ke ala, lauhala weaving, kama’a la’i (ti leaf sandals) and our relationship to our oceans and fishponds.

With the sharing of knowledge comes responsibility. The understanding and skills that were gained by each woman will be used to improve not only her own health, but shared with her family and the community.

This year’s wahine group looks forward to collaborating on a workshop for next year’s ‘Aha Wahine conference.