This time last year, a group of Molokai residents greeted the Safari Explorer yacht with protest signs, while the state called for a security zone to ensure the vessel’s safe docking. Last week, the ongoing conflict was peacefully resolved, not only allowing continued visits from the 36-person yacht, but also designating Molokai as future home port of operations for the company. 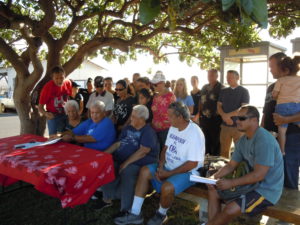 Community members, American Safari Cruises staff, state officials and protesters gathered last Wednesday in a spirit of understanding to sign an agreement that concludes more than a year of conflicts. Photo by Catherine Cluett

Amid smiles and hugs, former protesters, state officials and American Safari Cruises staff signed an agreement that’s been called the first of its kind in the state. It’s a positive conclusion to more than a year of struggles that involved community members, yacht company American Safari Cruises (ASC), the state and federal government and local business owners.

Department of Land and Natural Resources (DLNR) Chair Bill Aila, who flew to Molokai to sign the agreement, called the document “precedent-setting.”

Terms of the Agreement
The deal includes restrictions on visits to several sacred sites including Kaulukukui o Lanikaula near Pu`u o Hoku, Iliiliopae in central Mana`e, and Mo`omomi. There is to be no dumping of refuse from the vessel on Molokai. In addition, an orientation video will be created for passengers to view prior to visiting the island. The document also states that no more than 36 passengers will visit each docking (the yacht’s capacity), with no more than one vessel per week.

The agreement also includes a noteworthy change to current operations. It names Molokai as a future home port where passengers would begin and end the Hawaii cruise. That means passengers will often stay a few extra days on the island, bringing in more revenue for local businesses. One of the protesters’ complaints was that passengers slept and ate on the vessel, and therefore wouldn’t support Molokai’s restaurants and hotel. This compromise addresses that concern, creating a “win-win” for everyone, according to activist Walter Ritte, who led the protests. 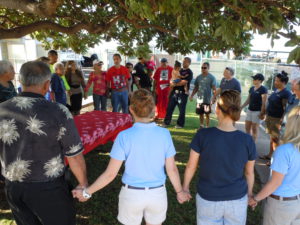 “We’re here because of the long process,” said Ritte. “Everyone wanted to do the best for Molokai… what we have today is the results of that process.”

The Process
The agreement marks the resolution of nearly a year and a half of disagreements and discussions about the future of tourism on Molokai. Some residents felt open community discussions should have been held prior to allowing the yacht to dock on Molokai in 2011. Many worried there was no protocol in place to restrict larger cruise ships from also visiting.

In response to community concerns and protests at the end of 2011, American Safari Cruises suspended its Molokai dockings in December and January, 2012. During that time, Molokai residents, state officials and the Aha Kiole, a local resource management group, held meetings to discuss the future of tour operations on the island.

The Aha Kiole created a document of comments resulting from meetings and surveys. The results indicated that the community was interested both in protecting Molokai’s ocean resources and small town character, as well as allowing for some commerce for our island vendors. Representatives from the Department of Transportation and DLNR, which share jurisdiction of Kaunakakai Wharf, as well ASC, addressed each concern to see how they could be resolved. The result was a discussion of both short and long-range options for the community, and the establishment of protocols and guidelines by the Aha Kiole and the state to guide the future of Molokai’s visitor industry.

Positive Conclusion
It all came together with the agreement last week.

“Nobody’s got protest signs today,” said Aila. “People are smiling instead of yelling.”

“I recognize so many faces today but [last time] we were on a line across from each other,” he said as he hugged kupuna and former protesters at the signing which was held under the tree at the wharf where protesters had gathered last year. “I hope all this turns into a really good thing for Molokai.”

“It’s pretty easy for us to abide by the agreement — we do it all already,” he added in an interview later.

Blanchard also said the company will be hiring Molokai residents exclusively for upcoming positions in both Alaska and Hawaii.

“Everyone has learned, including government,” said Aila. “It’s taken compassion on all sides to hear the others’ point of view.”

After signing the agreement, Molokai community members got a chance to tour the Safari Explorer and enjoy pupus on the vessel’s deck and dining room.

The Safari Explorer will continue docking weekly on Molokai until April, then resume again in November.