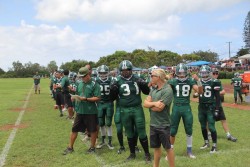 “Here’s 40 to 45 kids who I’ve never met before, and they all have names I’ve never heard of,” said Scala, a New Jersey native.

However, Scala is taking names and taping ankles in his new role as Molokai’s trainer, a position that’s been empty at the high school since last summer.

“It’s good to have somebody certified and well-educated that can help… us with our injuries or anything we have problems with,” said senior Kaimana Kahale, who plays wide receiver for Molokai. “[He’s an] easy guy to talk to, connects with us really good.”

Scala has “been involved with sports all my life.” He swam and played volleyball and soccer in high school, then swam for Springfield College in Massachusetts, where he studied athletic training and worked with several Springfield athletics teams. After graduating in 2014 he served as a trainer at a physical therapy clinic. He heard about the Molokai job opening from a Springfield alumnus working on Maui and decided to apply.

While Scala said it’s his first time in Hawaii, the avid surfer and former lifeguard is enjoying his new surroundings.

“The kids are great to work with. Everybody’s been welcoming and friendly,” he said. “It’s a bit of a lifestyle change for me because I kinda grew up half hour from New York City and the Jersey Shore, kind of a crowded area.”

Scala is the school’s fourth athletic trainer in four years. Molokai High School hasn’t had a long-term trainer for a while, said Athletic Director Lee DeRouin, and has sometimes gone months without one.

“In some cases being an athletic trainer is a stepping stone position to other opportunities in the profession, such as working for professional sports teams, small colleges and universities,” said DeRouin. “Some trainers go back to school to advance in the health care profession.”

While Scala isn’t sure how long he’ll be at his position, he’s at least committed for the full school year. DeRouin said the athletic department is grateful for community volunteers, including Dr. Dan McGuire, members of the Molokai Fire Department and off island trainers who travel with their teams.

DeRouin said Scala’s priority will be to home games. If there are multiple home events, Scala will attend to the sport with higher injury risk. He may also travel off island to help with the myriad of Maui Interscholastic League championships.

“It’s fantastic we can have someone who’s specifically certified to give the care for our student athletes,” said DeRouin. “… Not only is he helping our school but he’s gonna help relieve pressure that some of the trainers on Maui have been under for a couple of years.”