A Weekend of Farmer Spirit

Careers, crowns, games and glow sticks made for a fun and spirited weekend at Molokai High School’s Green and White Carnival and Career Fair this year.

Hosted by the Friends of Molokai High and Middle Schools and sponsored by the Office of Hawaiian Affairs, MHS students and alumni celebrated being Farmers by participating in some friendly competition Friday and Saturday to see which class showed the most green-and-white spirit. After a series of games and activities, reigning champs, Class of 1982, took home the title, adding another notch to their belt.

“Our objective is to show the other classes what spirit is all about,” said Tania Doao, Class of ’82. “We always participate in every activity and we’re all pretty competitive.”

Other festivities included crowning the new Mr. and Ms. Green and White for the 2013-2014 school year as well as some first-time MHS activities including a College and Career Fair and a Farmer Glow Run. All proceeds from the two-day event went towards the school and the MHS Athletics Department. 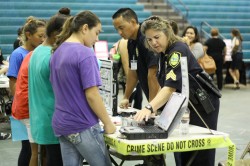 “We want to introduce students to colleges and careers that they don’t necessarily see on our island,” said Lisa Takata, MHS student activities coordinator.

“We show [students] some of the things we go through in training and what kind of education they need to become a law enforcement officer,” said Detective Winfrey from the Maui County Police Department during the event.

Takata said she hopes to make the College and Career Fair an annual event.

“This is a great opportunity for the students because they can network and build relationships with the presenters, which can lead into internships in the future,” she said. 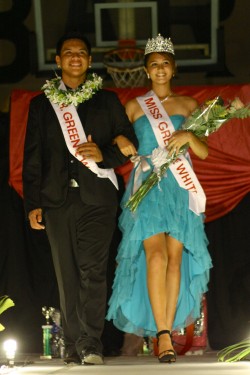 The Barn lights dimmed and the spotlight shown bright Friday evening as MHS couples competed to win the crown and title of the 2013-14 Mr. and Ms. Green and White.

Each class selected one couple to compete in the pageant with the exception of the junior class, who could not decide on a final couple, said Takata.

After a night of dancing, musical acts, and show-stopping flair and style, Greenleaf III and Merkel took home the crown, were named Mr. and Ms. Green and White and will represent MHS for the 2013-14 year.

“I know these children very well and some of them are very shy,” said Jamie Maioho, one of the three judges as well as the MHS school administrative services assistant. “Seeing a different side of them and watching them break out of their shells is something really special.” 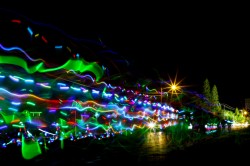 A trail of lights move down the street during the MHS Glow Run Saturday night. Photo by Jessica Ahles

Ready, Set, Glow!
Saturday night turned into a runner’s rave with live music and glow sticks to light the path of a 5k Glow Run.

About 200 runners and walkers of all ages took their mark at the high school with music courtesy of MoBettah Band to get them pumped and ready. At 8 p.m. participants took off into the night, reaching the halfway point at the Ho`olehua Credit Union, and returning to the school to finish the 3 mile route.

“[The run] wasn’t too hard,” said Xrystina Bicoy, a MHS senior. “My favorite part is just being out here together with all of our friends.”

The weekend festivities concluded with a live concert featuring Apana Eha at The Barn, sending the students off into Fall Break.

“This was such a hectic weekend, but it was all a lot of fun—anything for the students” said Takata.