A Visit from the Whales

Two enormous inflatable whales visited several Molokai preschools after “migrating” all the way from Kauai. The visit was part of program offered by the Storybook Theatre of Hawaii as a way to let children get up close and personal with Pacific Humpback Whales. The pair of whales was created in 1997 by renowned artist Evelyn Roth of Festival Arts in Australia, and has been used to educate thousands of children about Pacific Humpback Whales. 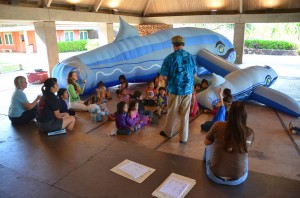 This year, Mark Jeffers of Storybook Theatre toured with the whales, visiting nearly 30 schools and reaching more than 1600 preschoolers, as well as their parents and teachers. The program allows children to crawl inside the whale, breach with the whale, and get spit out by the whale. They experience the enormity of the whale and learn about whale anatomy and behavior.

Jeffers plays “Captain Mark” as he guides the children on a fantasy trip around their island before telling stories and singing songs. He says that he likes to challenge the children by asking, “Can whales see the stars?” He does not allow the children to answer this question with words; instead he inspires their imagination by encouraging them to draw a picture of the answer. He is always amazed with what the children are able to come up with.