A Teen with a Vision: Project O.C.E.A.N Hawai‘i 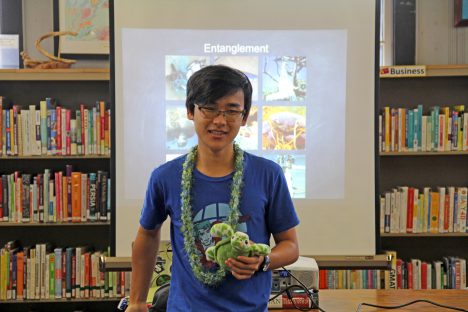 Molokai Public Library became the stage last week for a teenager who is causing a major tsunami after creating a project to educate people on the amount of plastic that ends up in the Pacific Ocean, and the necessity to make significant changes about it.

“No matter where you are, you have the power of your voice,” said Dyson Chee, a 17-year-old homeschooled high school senior from O‘ahu. “With that power, comes responsibility.”

Chee created the Project O.C.E.A.N. Hawai‘i after attending an Ocean Heroes Bootcamp when he was only 16 years old. Since then, he has learned more about plastic pollution and how it affects the oceans, and has been a vocal advocate against single-use plastic.

Growing up in Hawai‘i is also one of the major reasons Chee is so passionate about promoting cleaner oceans.

“The ocean really is my second home,” he said.

Besides pushing for legislation promoting cleaner oceans, Chee spends time visiting schools, libraries and community events sharing his project. He has visited Molokai Public Library twice; the first time was a year ago, and the second was Jan. 15.

One of Chee’s major accomplishments was helping to push Bill 40 in Honolulu, which banned single use plastics on O‘ahu. Honolulu Mayor Kirk Caldwell signed the bill into law last month. The bill goes into effect next year, adding restrictions to single-use plastics. On Jan. 1, 2022, a full ban goes into effect. 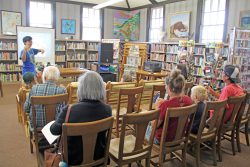 “If you come to O‘ahu one year from now, you’ll see the changes,” Chee said.

Chee’s presentations are designed to provide education and engagement. And that’s exactly what he got at Molokai Public Library. The small crowd that attended his presentation was mostly adults, with only one young boy in the audience. But it was that boy who got most of the answers right about the amount and types of plastic ending up in our shorelines.

Most were surprised to find out cigarette butts contain plastic and are the most commonly found items during beach cleanups, followed by wrappers, plastic bottles, bottle caps and plastic bags.

“Keep in mind that the decisions you make can alter a lot of things,” said Chee, adding we can think twice before opting to use single-use plastics.

A plastic straw will take 200 years until it breaks down to micro plastic invisible to the human eye, while a paper straw will break down in two-to-four weeks. Each day, about 500 million single-use plastic straws are used in the United States alone, he said.

Aluminum cans also take about 200 years to break down. Styrofoam can take 500 years to be reduced to mini beads, and with the right conditions those beads may never disintegrate, according to Chee.

Perhaps one of the most shocking findings for the audience was about disposable diapers.

“When you’re 100 years old, your diapers will still be on the landfill breaking down,” Chee said. “Your diapers might outlast you.”

The state of Hawai‘i’s economic engine relies heavily on tourism, and if our beaches become littered, they may not attract the billions of dollars poured each year here, he said.

But there are also other concerns. Plastic is really good at attracting chemicals, and when marine life mistakes plastic for food, they end up with those chemicals in their bodies. When we consume fish, we end up consuming those chemicals.

Chee said that studies have found styrene in the body of every person tested, and that each one of us eats about a credit-card amount of plastic every week, weather we eat fish or not.

Visit www.facebook.com/projectoceanhawaii/ to find out more about Chee’s project.