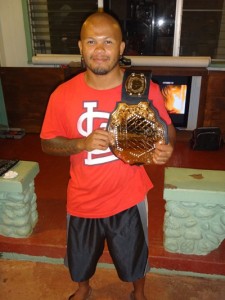 With most of the sell-out crowd at Hilo Civic Center cheering for their hometown hero and defending champ Pono Kuikahi, few expected Molokai mixed martial arts (MMA) fighter Nate Harris, 25, to bring home the belt at the Unorthodox Industries Championships (UIC) event in Hilo earlier this month. But he did.

After fighting in three three-minute rounds, Harris, who has been training with Molokai’s Relentless MMA for the past four years, claimed the UIC welterweight championship belt for the 170-pound weight bracket. He won by definitive judge’s decision. The win brings his amateur record to 4-1.

“I think I dominated the fight,” said Harris. “It was a sweet victory.”

Harris said he came out more aggressive than his opponent and played to his own strength –wrestling. He successfully took his opponent to the ground in both the first and third round, which helped him secure the victory.

Harris wrestled for four years in high school, but took a break from combat sports after he failed to win state championships his senior year in 2005. It was his roommate in college, one of the top professional MMA fighters in Oahu, who introduced him to MMA fighting in 2007. 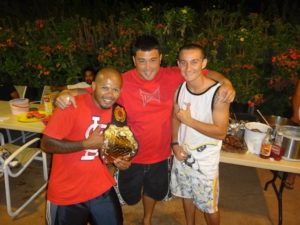 “It’s about time,” said Relentless MMA Trainer Beau Kikukawa of Harris’ win. “Physically, Nate was always there, but mentally I had to work with him. He had to show me discipline – dieting, coming in to the gym every day.”

After the judges announced he had won, Harris said he was surprised to hear the Hilo crowd actually cheering for him.

“It felt like one Rocky story,” he said,referencing the scene at the end when underdog Rocky Balboa wins the heavyweight championship of the world. “I gained fans and that was awesome.”

Harris plans to fight in his first professional MMA fight in Hilo in December.

Fellow Molokai fighter Kevin Dudoit, 19, also appeared on last month’s UIC-Hilo fight card, fighting against Hawaii Island’s EB Chong. After two three-minute rounds, the judges determined Chong the winner of the fight, after Dudoit said he wasn’t able to successfully keep the fight standing. He knew Chong was a grappler and tried to keep him on his feet, but Chong was aggressive and “took me down.” Nevertheless, Dudoit said he will use this loss to improve his own skills.

“It is easier to learn from a loss than a win,” said Dudoit. “I just got to keep training and work on everything.”

Dudoit has been training with Relentless MMA intermittently for about a year. His current record is 1-1.

2 Responses to “‘A Sweet Victory’”