It was a weekend of paddling races on Molokai, with Saturday bringing more than 100 athletes to the island for the Maui2Molokai stand up paddle (SUP) race. 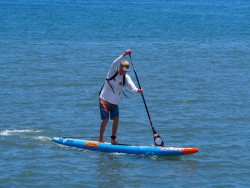 “This is not just a testing area, this is one of the best courses in the world,” said race founder Rodney Kilborn, of Maui. People from all over the world come here to race, he said, and this year’s crossing featured 104 athletes. That’s a big increase from the 18 paddlers that signed up six years ago, according to Kilborn.

The 27-mile course from Honolua Bay to Kaunakakai Wharf across the Pailolo Channel has gained acclaim as not only good preparation for the acclaimed Molokai to Oahu race that takes place next week but a world class event in its own right.

For six years straight, since the inception of the race, Connor Baxter has won, beginning his streak when he was just 14 years old. He completed the course this year in three hours 13 minutes.

Many racers who participated in the Maui2Molokai stayed on the island for another event the following day. The M4Molokai, a local race with an 8.5-mile downwind course from Kamalo to Hotel Molokai, welcomes SUP, one-man canoes (OC1) and two-man canoes (OC2) for its third year. The event also featured a shorter family course for those wanting to get out on the water less competitively. 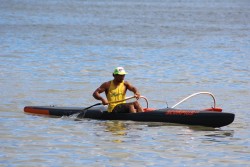 “We wanted to do a race that brings people to Molokai, keeps people on Molokai, and is all about Molokai,” said Clare Mawae, one of the event organizers. “We want people to come and don’t just leave straight away.”

The Molokai race attracted 79 athletes, about 15 of which were from Molokai, with more than half a dozen countries represented. Molokai’s Kamakou Mariano hit the finish line first, claiming the men’s open OC1 division title. Second in the same division was another local competitor, James Pua`a Spencer.

“It was good fun. We had surf on the outside, but once we hit the inside it was dead water and it was hard to paddle,” said Pua`a Spencer. “Was good for paddle with other guys from Molokai. It was interesting cause there aren’t really any other races [that take place completely] on Molokai. I enjoyed it.”

Some visiting competitors will be spending the week on Molokai participating in cultural activities and tours to learn more about the island, said Mawae.

Full results for both races were not available Sunday before going to press.