A Slice of Sweet Harvest 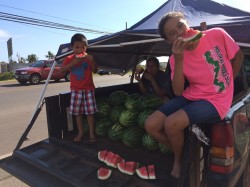 The Davis family enjoys watermelon at their roadside stand near Rawlins’ Chevron. Photo by Jared Davis.

The summer sun beats down on the Davis family watermelon stand on Kamehameha Highway by Rawlins’ Chevron gas station every Saturday. With a pickup truck pilled sky-high with about 500 fresh, colossal, 20-pound watermelons ripened to perfection in Ho`olehua’s heat, Jared Davis sells his all-natural watermelons at his roadside stand in the summertime on Molokai.

For Davis, a third generation farmer who is keeping farming alive in his family and on Molokai, watermelons are a vital crop and livelihood for his ohana, he said.

“When I was younger there were a lot of farmers around here that planted watermelon,” Davis said. “All my neighbors, all the old timers, but a lot of them aren’t around anymore because they’ve passed away.”

David took up the family trade two years ago. His uncle and grandfather farmed watermelon, and now Davis said he is among the few Molokai watermelon farmers left.

This time of year, the family-run, three-acre watermelon farm on homestead land in Ho`olehua is a flurry of activity.

Davis and his family of six, plant watermelons for the summer months of May, June and July in an ongoing process throughout the season. Typically the season ends near the end of July, but Davis has planted an extra crop for August to meet demands this year.

In addition to the roadside stand, Davis sells his high-grade watermelons for 85 cents a pound to Molokai’s Friendly Market, Kalaupu`u Market and Kumu Farms. He only sells his watermelons on island.

“I try to do more than what I did the year before,” Davis said. “I take what happened last year and see how I could sell more? My theory is to plant as much watermelons as possible and as much as I can handle, and the more melons I have to sell the easier it is for me to market.” 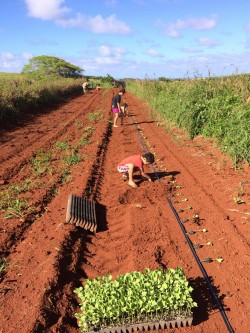 From Farm To Food Dessert

The journey a watermelon takes from its vine on the ground to its place at the store or on a stand is a long one.

It gets picked, washed, polished and trucked — and that’s before it’s even left the farm.

Early Saturday morning, the Davis family rises at the break of dawn and works for five to six hours picking melons and loading them into their pickup truck. To ease Saturday’s workload, the family works in sections every day on the farm for a couple of hours. As each week goes by, they store the harvested watermelons in the garage until it’s time to deliver for Saturday’s big sell.

Next, Davis goes into town and sells what he couldn’t in store — melons with scratches or marks — at a discounted rate.

Besides selling watermelons, the Davis’ also produce eggs. They have 150 free-range egg layers — chickens that aren’t kept caged — or as Davis would call them, “happy chickens,” on one acre of farmland. The hens never take a day off and lay an average 8 to 10 dozen eggs per day. His five children then pick, wash and package the eggs every week to sell with the watermelons at Friendly Market, Kalaupu`u Market and to Kumu Farms.

The keiki have been involved in the family business for four years. Davis said he wants to keep farming in the family but is ultimately teaching his children the characteristics of working hard.

“Every year it’s getting better and my kids see the results at the end of the season,” Davis said. “Every year they cannot wait. They work super hard and enjoy farming.”

It’s important for local farmers to be sustainable, Davis said.

“It’s the only way to be profitable,” Davis said. “Nowadays it’s tough. It’s not easy being a farmer, so learning how to recycle and cut costs is crucial and important for our environment.”

Davis uses manure from his chickens to fertilize the watermelons. He feeds the chickens left-over watermelon scraps and un-marketable watermelons in an effort to recycle and be sustainable. Additionally, the Davis farm doesn’t use poison, pesticides or chemicals, but instead sticks to natural techniques.

“It’s a circle of life,” Davis said. “We’re trying to be sustainable without spending too much money; you only buy what you really need.” 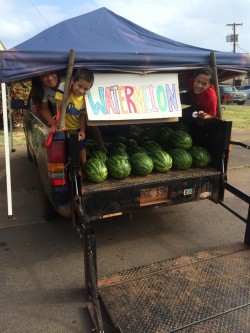 It Takes a Village

Davis said the success of their farm takes many behind-the-scenes volunteers.

Micah Buchanan of Molokai Gold Honey partners with Davis to bring his bees to aid in pollinating his watermelon flowers across the farm at the start of the season. Bees are essential to producing watermelons with a good shape and the flower must be pollinated at least five times for this to occur, Davis said.

Castle Adolpho, Davis’ neighbor “is one of the last old-timer watermelon farmers around,” Davis said. He gets a lot of knowledge from him and has helped Davis with tractor work to break the field open to plant seeds.

At the start of the year, Glenn Teves and Alton Arakaki, UH College of Tropical Agriculture and Human Resources extension agents, help Davis test his soil. The results tell Davis what he needs to put in the ground for a better yield and gives him an ingredient plan.

“We’re figuring it out and every year it’s getting better,” Davis said. “I wouldn’t be able to have quality fruits if it wasn’t for the help of this `ohana.”

One Response to “A Slice of Sweet Harvest”