A Plan for Malama Park 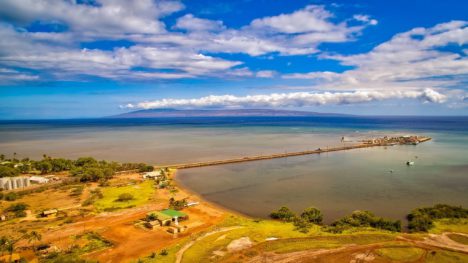 For years, homesteaders and other community members, planners and others have been discussing the best approach to bring life to an important and currently neglected area of Kaunakakai – Malama Cultural Park. In 2011, the Dept. of Hawaiian Homelands acquired a portion of the lands comprising the park from the State of Hawaii, and just released a Special Area Plan for its management.

“The Malama Cultural Park is a treasured wahi pana (ancestral land), not only for the people of Kaunakakai, but also for residents throughout the island of Molokai,” states the plan. “The Department of Hawaiian Home Lands (DHHL) seeks to preserve this wahi pana and to support the continuing practice of ocean recreational use in a manner that protects and respects the historical legacy of this place. This Special Area Plan (SAP) will help to guide the long-term use and management of the park, protecting its unique natural and cultural resources for present and future generations.”

The plan examines existing conditions of the park including natural resources, infrastructure and facilities, threats or hazards and proposes various strategies for how it can be managed.

“This plan reflects the importance of maintaining a Hawaiian sense of place and access to the shoreline,” said Deputy to the Chair Tyler Iokepa Gomes in a DHHL release. “We look forward to seeing how the community uses this plan to preserve this wahi pana.” 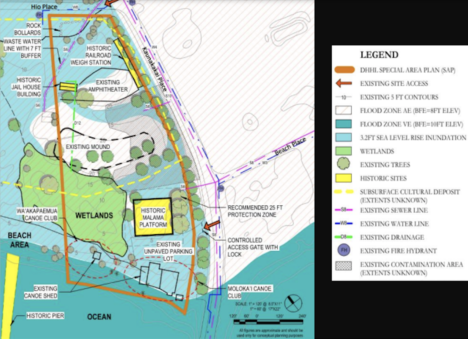 “Through the SAP’s beneficiary consultation process, it became evident that the community held a strong desire to take over the management kuleana for the Plan Area and its resources,” states the plan. “Beneficiaries expressed a hope that community-led organizations could have the opportunity to help operate and manage the Plan Area through formalized partnership agreements with DHHL.”

Overall, the SAP does not call for significant development of the park.

“Rather, beneficiaries preferred for the park to retain its open and natural characteristics,” the plan states. “Beneficiaries also recognize that the future improvements recommended in this plan would be funded by and implemented by themselves or other community partners. A Community-Oriented Management Model is envisioned in which qualified volunteer groups accept and share the stewardship responsibilities for the park. This model involves stakeholders in all aspects of decision making, management and funding.”

This is not the first time a plan for the park was drawn up. In 1995, the State Department of Business Economic Development and Tourism (DBEDT), proposed the development of an approximately 11-acre area in Kaunakakai for the creation of Malama Cultural Park, which included a Master Plan for the area. Only a few of the Master Plan’s proposed actions were ever realized, however, according to DHHL.

At that time, DLNR owned the entire park site comprised of 11.27 acres. In addition to parcels totaling about 4.5 acres that are now owned by DHHL, the 1995 master plan included two neighboring properties, which are now under the jurisdiction of the County Dept. of Parks and Recreation.

DHHL acquired the area with two existing tenants, the Molokai Canoe Club and the Wa‘akapaemua Canoe Club, and DHHL acknowledges Prince Kuhio’s celebration of the value of canoe paddling. Both canoe clubs had an active presence in the park since before the Plan Area was transferred from the DLNR to DHHL in 2011, and have played an important role in the stewardship of the park, according to the plan.

To kickstart the SAP process, an initial stakeholder meeting was held in July 2020, followed by multiple beneficiary consultations, small group consultations and homestead meetings over the last two years. A draft SAP was released in February, and a fourth beneficiary consultation meeting in May provided feedback on the draft plan. Hawaiian Homes Commission approved the Malama Cultural Park Special Area Plan at its July meeting. The final plan was released publicly last week. 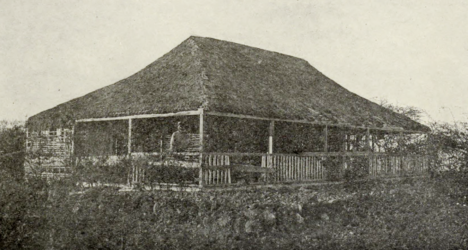 History abounds within the park.

The Malama Cultural Park is the location of the former residence of the Kamehameha V. The house, known as Malama, was built around 1859, possibly on top of Mahinahina Heiau. The Malama house was later moved and Kala‘iakamanu Church was built on top of the house platform. The church was relocated nearby in the 1920s and then moved again because of the 1946 tsunami. The existing Malama Platform is located just behind the Wa‘akapaemua Canoe Club facilities on the southern portion of the Plan Area. 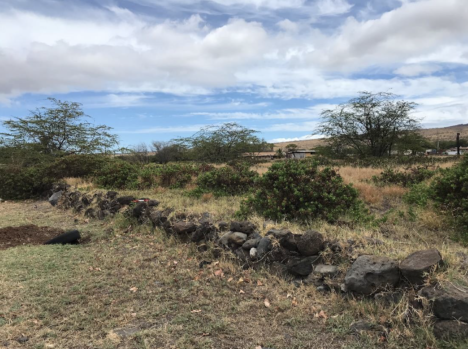 Known cultural deposits are also present. Earlier archaeological studies of the park revealed shellfish, charcoal, and fish bone as well as historic artifacts such as a pearl-shell button underneath the soil’s surface. Traditional artifacts include a basalt grinding or polishing stone and a coral abrader. Historic material dating to the time of Kamehameha V’s residence was also noted in addition to 12 features uncovered during test excavations.

The historic jailhouse within the park is considered to be the oldest wooden structure on Molokai and has been moved around the island over the years. Originally located in Puko‘o in the early 1800s, it was then moved to ‘Ualapu‘e around 1925. The jailhouse was relocated again about 10 years later to where the Molokai Public Library stands today, before landing at its current location at the Malama Cultural Park near the restrooms. According to the plan document, at least four Molokai residents of Japanese heritage were temporarily detained at the Kaunakakai courthouse and jail after the bombing of Pearl Harbor.

Since the structure has been moved from its original location and is in very poor condition, it is ineligible for inclusion on the National Register of Historic Places, and has been determined to have “no integrity remaining.”

Behind the line of milo trees along the wharf road, is a cement platform that served as the historic railroad weigh station. In the 1940s and ‘50s, Molokai’s primary export was pineapple, with about 16,0800 acres of pineapple fields by 1968, the plan states. 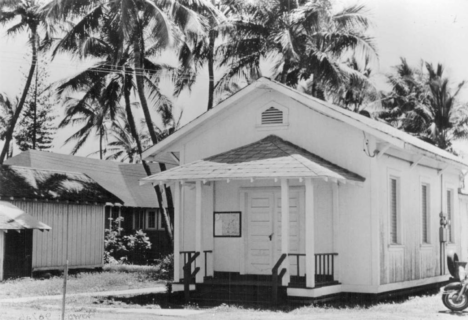 Jailhouse at a prior site. Photo courtesy of DHHL.

“The pineapple company built the cement truck weigh station along the eastern side of the property, which remains today as a quiet reminder of Molokai’s pineapple heyday,” the plan reads. “The historic weigh station at the Plan Area is part of the railroad, which ran along Kaunakakai Place and gave the pineapple plantations access to the wharf.”

An amphitheater and stage in the park are two of the original components of the 1995 Master Plan and among the few actions that were actually completed. The stage area is approximately 12,000 square feet of elevated area, intended to be a performance space for hula, music, and other outdoor stage performances. A crescent shaped grassy area makai of the stage served as a seating area for about 1,000 people. The area was once equipped with electrical equipment for audio and video, with an irrigation system, all of which have fallen into disrepair. The area was used to host a farmers market and weddings, and in the recent past, the Malama Cultural Park was used as the site for the annual Ka Molokai Makahiki Festival.

The park is currently used for canoe paddling, regatta activities, family water activities like swimming, water sports and fishing, and it has long been associated with traditional and customary practices. The plan states that many residents have expressed a hope that the SAP will reinvigorate the Malama Cultural Park and allow for more culturally-based activities. Community members also acknowledged the park’s use by homeless individuals. Additionally, DHHL recognizes a family memorial site created in honor of Herman “Ekolu” Coelho, who passed away in 2020, and stated willingness to work with the family for a more permanent memorial. 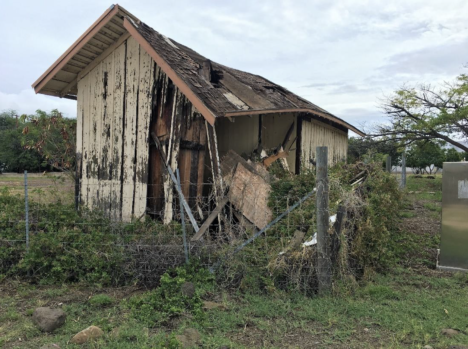 Along with historic sites, the park encompasses a wetland habitat.

Because of its proximity to the ocean, the plan also acknowledges the effect that sea level rise, wave inundation and coastal erosion. Current scientific models for Molokai project over a three-foot increase by 2070, which would put most of the park underwater.

“The existing Plan Area lacks a comprehensive management approach to maintain the park and its resources,” states the SAP. “The lack of a single entity responsible for the management of the Plan Area as a whole complicates the development of policy and programs to address the desires of various existing and future user groups… As the landowner, DHHL currently provides minimal maintenance support in the form of groundskeeping and trash collection, as DHHL’s priority is to provide homesteading opportunities to address the waitlist. As such, limited budget resources are allocated to the ongoing and long-term stewardship of the Plan Area.”

DHHL suggests allocation of management strategies and partnerships based on resources within the park — like cultural resources, natural resources, waste management and facility access and security — or divided by management zones by use that include canoe clubs, community areas and wetland.

“As such, the SAP is intended to be implemented by community partners selected by DHHL,” the SAP states. “Beneficiaries preferred a management structure involving multiple managing entities with delineated areas and defined responsibilities, with the option to transition to an umbrella management approach at a later time.”

The exact location and design of any proposed improvements in the future would need to be studied and reviewed during the plan’s implementation.

For more information or to read the Special Area Plan in its entirety, visit hhl.hawaii.gov/po/special-area-plans.