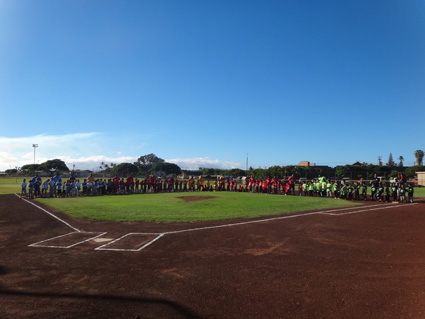 Little Leagues players ages 4 to 8 assembled into five teams –the White Sox, the Indians, the Rangers, the Phillies and the Athletics. Photo by Eileen Chao.

More than 70 young T-ballers aged 4 to 8 gathered at Kaunakakai ball field early Saturday morning to officially bat off the start of this year’s Little League season. Before any games commenced, all five teams stood for the opening ceremony, which featured the national and Hawaiian anthem, guest speakers and a pule.

“There’s not too much on Molokai for little ones,” said Minky Young, president of Molokai Little League. “Little League offers not only baseball, but unity, community involvement, health and wellness.” 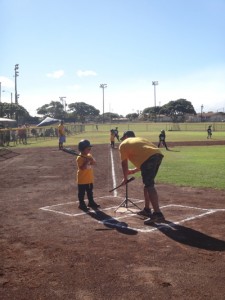 Little League has been present on Molokai for over 35 years, and many parents and coaches remember playing in the league themselves as keiki. Coach Ken Nakayama, who has been involved with Little League for almost 30 years, remembers teaching his children how to play baseball and then in turn watching them teach theirs.

“The children have taught me just as much [as I’ve taught them],” said Nakayama after it was announced that this season would be dedicated to him and all the time he has volunteered for the Little League. “They have taught me patience, love and understanding…It’s been a great honor.”

Youth from ages 4 to 16 may participate in Little League, with older age brackets beginning their games in March. A total of about 250 athletes registered last year, and Young said she expects around the same numbers this year. Last season, the Molokai All Stars, ages 11 to 12, became District 3 champions and advanced to the state tournament on Oahu, but were defeated by Hilo, 6-4.

The player’s pledge, which was read by little leaguer Owen Svetin, promises: “I will play fair and strive to win, but win or lose, I will always do my best.”