A Look Into Kalaupapa Life 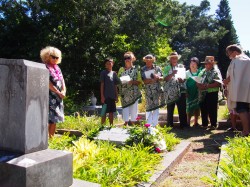 The exhibit’s opening blessing was held gathered around the gravesite of Sarah Miala Meyer Benjamin. Photo by Catherine Cluett.

When many people think of Kalaupapa, images of exile, suffering and disfigurement come to mind – stories from history books that tell a horrific tale from outside eyes. A photo exhibit that opened at the Molokai Museum and Cultural Center in Kalae last Saturday seeks to depict the people of Kalaupapa in a new light.

“So much of [Kalaupapa’s] history is based on other people’s accounts and often sensationalized and just not true,” said Valerie Monson, coordinator for Ka `Ohana O Kalaupapa, the organization sponsoring the exhibit. “[The exhibit’s goal] is to capture history in their own words and the images they chose. We hope people will come away with a completely different image of who they are.”

Called “A Reflection of Kalaupapa: Past, Present and Future,” the gallery has made a tour of the Hawaiian Islands and is on Molokai to stay until August of next year.

The collection of mostly black and white photographs, both historic and contemporary, and their accompanying explanatory placards, represent daily life in the settlement.

Many photos depict Kalaupapa residents showing off their artistic skills or inventive solutions. In one, Richard Marks – owner and guide of Damien Tours, a business he started with his wife Gloria — stands surrounded by a large collection of artifacts, a spoon in his hand. The utensil was designed to wrap around the wrist to accommodate those who lost their fingers from the progression of Hansen’s disease.

“They had all these old ideas about leprosy,” Marks commented on outdated leprosy laws in Hawaii. “I just wouldn’t believe any of them.”

Marks contested those laws, which led to their abolition in 1969.

Another photo shows Mariano Rea in his Kalaupapa store. When asked by a reporter if he was bitter, he replied, “How can I be bitter? If it wasn’t for this disease, I wouldn’t know you.”

The exhibit is dedicated to the late Sarah Miala Meyer Kaopuiki Benjamin, whose childhood home is next to the Molokai Museum.

After being diagnosed with Hansen’s disease, Benjamin was transferred to Kalaupapa in 1942. Before that, she was sent to Kalihi Hospital on Oahu, where, though she had no children of her own, she was put in charge of 12 adolescent girls who had been separated from their families at the hospital.

“She helped them to become women,” said Monson, a journalist who has spent a lot of time in Kalaupapa and knew Benjamin personally. “She taught them what any mother would teach. [Many have said] they consider her their second mother.”

Benjamin went on to become a leader in the Kalaupapa community, respected for her knowledge of Hawaiian traditions, language and medicinal plants.

“One of the first signs of spring in Kalaupapa was Sarah riding in the back of her husband’s truck with her hair loose, just enjoying spring,” Monson recalled.

Benjamin lived in the settlement until her death in 2005, and is buried in the R.W. Meyer Cemetery next to the museum, where the opening blessing for the exhibit was held in the dappled shade by her gravesite.

“You are the embodiment of what God intended a human being to be,” said Monson, her voice choked as she laid a lei over Benjamin’s headstone. “This exhibit is for you.”

“We went down several times to see her [in Kalaupapa],” Meyer said of his aunt. “I didn’t get to meet her too many times… She was just a regular person to me…. She didn’t have her fingers already but she was always knitting and crocheting.”

Meyer said he and his family were excited when they heard about the exhibit and he said it’s nice to hear good things about his Aunty Miala, as Benjamin was called by family and friends.

“She was really spirited – she didn’t let it get her down,” Meyer recalls of her reaction to adversity.

“[Benjamin] was someone who could handle any kind of crisis,” said Monson. “She had the ability to adapt to any situation thrown at her.”

“Everywhere else you go, you go to the store and buy, buy, buy. Here in Kalaupapa, we just look around and try, try, try,” reads a quote from Cathrine Puahala, underneath her photo of her standing in front of her house. The caption explains that Puahala would “turn Vienna Sausage can lids into glittering Christmas angels, old tires into wreaths and discarded deer horns into avant-garde holiday trees.” 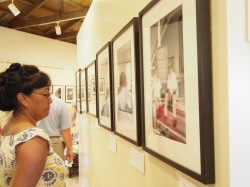 Acclaimed photographer Wayne Levin, who began visiting Kalaupapa in 1984, captured many of the images displayed in the gallery. Though he was not able to be present at the exhibit opening due to a family emergency, Levin did assist in the set-up and arrangement of the photos, said Noelani Meyer Keliikipi, executive director of the Molokai Museum and Cultural Center.

“We all need to learn more [about Kalaupapa’s history],” said Keliikipi, Benjamin’s great-niece. “Through the exhibit we can learn about the personal history of individuals so they’re not forgotten.”

Keliikipi said the museum removed their ongoing exhibit to make room for the photographs, and repainted the gallery especially for the occasion.

About 100 attendees visited the display on Saturday, enjoying free admission for the day. Gallery-goers paused in front of photographs, reminisced on their own memories of Kalaupapa friends or relatives, and listened to music played by Alu Like’s kupuna group performing songs about Kalaupapa.

Produced by Ka `Ohana O Kalaupapa, a nonprofit that includes Kalaupapa residents, family members/descendants and friends of the community, the exhibit recently wrapped up a month at Kalaupapa’s Paschoal Hall, where it drew nearly 600 visitors.

“It was wonderful to see the enthusiasm from so many people who wanted to view the exhibit,” said `Ohana President Boogie Kahilihiwa, a Kalaupapa resident for more than 50 years, in a press release.

Organizers hope that during its year at the Molokai Museum and Cultural Center, the gallery will be visited by school classes, kupuna groups and others. Special presentations will also be held periodically.

Keliikipi said it serves as another way to connect families with relatives in Kalaupapa, and a starting point for sharing their own stories and connections to Kalaupapa’s people.

For more information, call the Molokai Museum and Cultural Center at 567-6436.