A Legacy of Love’s 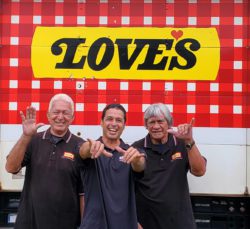 Love’s Bakery has held a special place in Hawaii’s history for nearly 170 years as the business closes at the end of this month. Love’s legacy on Molokai began in the mid-1900s and the bakery’s closure also brings the end of an era for its Molokai employees and customers.

Details are scarce on the early employees of Love’s on Molokai — Francis Yuen and Sadao Otsuka, who have both passed away — but most sources agree Love’s began distributing on Molokai in the 1950s. More recently, Dickie Linkee, George Kahinu and Mike Kahinu drove the Love’s trucks.

George began with Love’s in 1993. His title was sales supervisor “but on Molokai, we’re an elite group… you’re the supervisor, you’re slave, you’re everything.” He recalls heading to the airport early each morning to pick up the freshly baked bread.

“I would wake up at 3:30 in the morning to meet the plane, and I’d come back and sort the breads, and as soon as the first store open up, I’d be there,” George recalled. “Then I’d go servicing the stores all day long, I’d fill up the shelves, about two or three times per day.”

George said he got a start in sales working for Aka Hodgins before Love’s approached him for a job.

“I always wanted be a Love’s representative on Molokai,” said George. “I remember watching Mr. Linkee, he’d start early in the morning and then go do his paperwork.”

He said he was inspired to excel at his job by Love’s management in Honolulu and had nothing but good things to say about the company.

“Everything they said, I tried to come back and do it,” he said. “It worked for me, my sales on Molokai were through the roof…. These guys were really good to me.”

Mike began working with his dad part time in 2005, and when George retired in 2011, Mike took over full time.

Over the years, there were some laughable mishaps on the job.

Mike chuckled as he shared a story Linkee told him about the plane crash landing in the bushes at the airport early one morning. Though no one was hurt, bread was strewn around and Linkee retrieved as much of it as could be recovered and still distributed it to the stores that day.

George had his own memorable morning at an airport bread pickup.

“Spooky stuff… where they drop off the bread at the airport, that’s where dead bodies come in or dead bodies go out. You know what the box look like. One morning I was up there really early and had a box up there. I heard ‘wooooo’… and again. I went walking around, and had a girl up there. [She was making the sound.] I said, ‘You scared the crap out of me!’”

For Mike, he recalled turning into town one day during Saturday market and bread cases coming flying out of the back of the truck.

“I didn’t secure the stacks well enough… I didn’t make that mistake again!” he laughed.

When air freight prices went up, Love’s switched to shipping bread on the barge. They would bake it fresh to load on Young Brothers, and it would arrive on Molokai a couple days later — a routine that was practiced through recent years until Mike’s last pickup on Monday this week.

Along with occasional mishaps, the job brought decades of good memories for Molokai employees.

For Mike, he said “just being out in the community was my highlight, people coming up to the truck and talking story.”

He remembers fondly “when kids faces light up when they see the Love’s truck because they know that’s the donuts and pastries truck (I may have given out one or a few boxes in my time!) and donating bread for funeral services over the years.”

When the pandemic hit last year and stores closed, causing a sudden excess of bread, the Kahinus sold loaves out of the back of the Love’s truck in their yard, helping both the business and residents.

“When the island shut down in March 2020, Love’s along with many vendors and establishments were stuck with an overage of inventory that couldn’t go into stores,” said Mike. “We figured out a way to move the bread (we sold it at cost) before it expired as we were unsure when the stores would re-open.”

Love’s was founded in 1851, opening business in Honolulu and became the state’s oldest and largest local bakery. After surviving bubonic plague outbreaks in the early 1900s and two world wars, the business continued to thrive after Hawaii’s statehood.

But it became a casualty of the COVID-19 pandemic, reporting a more than 20 percent loss in 2020 due to the closure of restaurants and hotels. That wasn’t the start of its challenges though — the bakery had reported a decline in sales even before the pandemic, despite having “worked diligently to cut expenses, to maintain our market share and to remedy our operational difficulties,” the bakery’s management said in a statement. The business received federal Paycheck Protection Program funding last year, but was unable to qualify for the second round of assistance and was not “able to obtain additional financing.”

For Molokai, the loss of Love’s means all the bread — except for that baked by Kanemitsu Bakery — will come in frozen and be thawed out before hitting the shelves. That’s what has happened for years with some brands, and Love’s exit will now make it the only option.

Mike’s wife Nani Kahinu said a lot of local businesses are feeling the “domino effect” of the pandemic.

“I really hope people think about sourcing local, because it’s hard to compete with mainland prices,” she said. “It’s difficult because of the price margins. Anything made in Hawaii is marked up higher — it’s about affordability. That’s a lot of the contribution factor for local businesses.”

Now that Mike will no longer work for Love’s, their family will rely more heavily on Nani’s business, Na’ike LLC, which makes shoyu sauces, along with distributing other local food products.

“He really was the breadwinner!” Nani laughed.

“I’d like to thank the community for the support throughout the years, those memories and seeing everyone,” said Mike. “A simple ‘good morning’ can change people’s day. I’ve tried to be that positive influence in the community, to smile and do my job.”

As for the iconic Love’s trucks, they’re now a permanent installation on the Kahinu homestead — something of an antiquity, along with Love’s products.

“Like I’ve been telling customers, ‘Eat the bread but save the wrappers!’ joked Mike.