A Heart for Higher Education 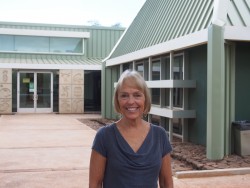 Thirty years ago, when Donna Haytko-Paoa began her career as Coordinator of what’s now known as the University of Hawaii’s Maui College, Molokai site, pursuing higher education on Molokai was a struggle.

In the early 80s, Molokai residents wanting to attain a college degree would scrunch into child-size seats in a classroom at Kaunakakai Elementary School.

“You would see rather large individuals sitting in Kindergarten chairs,” recalled Dan Bennett, who started at the college as a lecturer in 1982.

“In 1994, as a student at the Molokai Education Center, the rain was dripping through the roof of the former Maui Electric Building onto my paper as I sat writing an exam for a [Masters in Education] program,” wrote Molokai student-turned-professor, Caryl Hitchcock, in a nomination letter for Haytko-Paoa before she was named among UH Community Colleges’ finest last November. “Classes were held in this old building as well as in local schools and even a warehouse in the center of town.”

Now, as Haytko-Paoa recently celebrated her retirement at the end of 2014, Molokai’s college campus has its own spacious buildings and much to look forward to.

“Today… through Donna’s vision and hard work, we have a beautiful campus, building, library, computer lab, state of the art distance learning technology and more exciting developments on the way,” wrote Hitchcock.

In her 30 years of service, Haytko-Paoa made it her goal to make education more accessible to Molokai residents.

“To me, the way this island gets ahead is [through] education… if each person becomes the best that they can be,” she said. “When we can move our island forward by educating those who live here, that’s the way to do it.”

As the first generation in her family to attend college, Haytko-Paoa knows first-hand how much a degree can mean.

“Neither my dad nor my mom graduated high school,” she said. “My dad dropped out of school in eighth grade – they were so poor he had to go find a job. My mom was a German national and she grew up under Hitler. She made it through her junior year before her high school was bombed.”

When Haytko-Paoa first came to Hawaii from Colorado to work as a lifeguard in Waikiki, she already had her Bachelor’s degree. Within a year, she met her future husband, Mel Paoa, and when they moved Molokai, she said she realized she wanted to go on to pursue even higher education by getting her Master’s in political science.

“I flew back and forth to UH Manoa every week for a year and a half [in 1976-77] just to get the Master’s,” she said. “How different it is now that people can stay in their homes and get higher degrees [and] advanced opportunities.”

Fresh out of the graduate program, she taught her first class at Maui Community College in 1977, but after that, worked for several airlines on Molokai for 10 years until the Molokai coordinator position opened in 1984.

“When she started, she did everything,” recalled Hitchcock, who is now a professor at UH Manoa. “She was the librarian, the teacher, the financial aid officer, and any other duties that were required to offer courses.”

Since the first classes had been offered on Molokai in 1970, Haytko-Paoa was only the second to hold the coordinator position – Fred Bicoy was the first.

“She was the right person for the right job, a never-ending advocate for higher education on Molokai,” said Bennett.

Vision for the Future

While Haytko-Paoa can list the development of the current two-acre college campus among her accomplishments as she retires, she said what she’s most proud of hasn’t even happened yet: the vision of a 15-acre campus on paper in the college’s long-range development plan. She said that plan has remained the same “on the books” since the first Molokai Community Plan was being reviewed in 1994.

While that goal may be years away, in the meantime, the current two-acre campus will be expanding to five acres with the purchase of an adjacent three acres of land in 2012 – a development that’s been a long time coming. Two instructional buildings are planned for the expansion, one of which will house a large, multi-use theater auditorium, said Haytko-Paoa. The 500-seat space with a stage and theatrical lighting and acoustics can be used for liberal and performing arts for the college, as well as for community use – a facility that’s currently missing from the island, she said.

The state legislature has also appropriated $2.25 million toward the project. The funding has not yet been released because of a UH-wide moratorium on new buildings until a backlog of statewide repairs and maintenance can be completed, according to Haytko-Paoa. But she said she hopes to see the new Molokai facilities take shape in the three to four years.

That will be one of the tasks of the new Molokai coordinator. Applications for the position are being accepted, which will be reviewed by a committee of Maui and Molokai individuals. The committee will conduct interviews and make a recommendation to the Maui College chancellor’s office. Haytko-Paoa said she hopes a Molokai candidate can be the one to carry on her vision.

“Interest over here has been good… I think we have all the talent, skills and abilities [on Molokai for next coordinator],” she said.

Haytko-Paoa said she felt the timing was right for her retirement, with a strong foundation laid for the college’s future. There is also a change in leadership at the Maui College level, with a new chancellor taking the helm. Haytko-Paoa said she feels it will offer a fresh start and good partnership with administration for the new Molokai coordinator.

“There’s a time when it’s time to turn over to the younger generation,” she said. “Have the confidence that they’re young and energetic and have the work ethic and can get this done… and believe as much as I do in what higher education can do for someone.”

Looking back at the last 30 years, Haytko-Paoa said she will most fondly remember the graduation ceremonies held on the island every four years – an occasion that often encompasses “grandmas, moms and kids – generational graduates,” she said. The commencements are also a point of pride across the UH system because Molokai has the highest Native Hawaiian enrollment – close to 80 percent each semester – of any UH campus.

In 2008, Haytko-Paoa was honored with the University’s Willard Wilson Distinguished Service Award that recognizes one person in the UH system each year.

“Others in the system saw how hard we were all working over here on Molokai,” said Haytko-Paoa. “That was a nice affirmation that Molokai means something, that we are important.”

In November, she got another confirmation of her hard work over the last 30 years. In commemoration of the 50th anniversary of UH’s community colleges, UH recognized 50 individuals for its 50 Finest Award – a one-time honor that selected among any of the individuals, programs and services at all the community college campuses in the last 50 years – a pool of thousands.

Haytko-Paoa was named among the honorees.

“’50 Finest’ award [was] given to those who have significantly contributed to the growth and innovation of the community colleges over the years,” states the UH Community Colleges website.

It was a fitting way to close her career as Molokai coordinator.

“She always seemed to enjoy herself, she always had a smile on her face and an open door for everyone,” said Bennett, who taught math at the college until 2012 and now instructs ceramics.

Now, Haytko-Paoa said she plans to enjoy her retirement, with a bucket-list that includes a ski trip in Colorado with her sister, a family Iron Man race in June, and following her Hokulea-captain husband as he continues sailing with the vessel’s Worldwide Voyage this year.

Mel, who retired from his job as a paramedic in 2013, joked that they’re working to get to know each again.

“It’s hard having to look at each other 24 hours a day,” he chuckled mischievously, admitting that he’s proud of all she’s accomplished. “All my kids are college grads – that’s from their mother’s side!”

Always an educator at heart, Haytko-Paoa also plans to still teach part-time at the college as a political science professor.

“That’s the fun part!” she laughed. “I can still connect with students and stay involved – that’s pure satisfaction.”