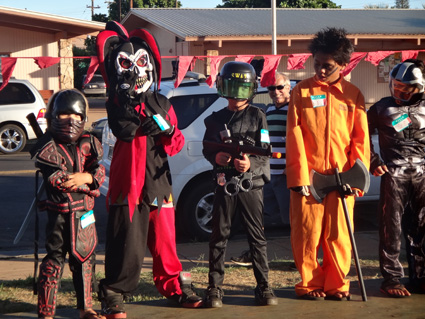 There were plenty of frightful characters, but Jaiden Jordan, the scary jester, took home the prize for scariest costume for the Kindergarten through third grade division. Photo by Eileen Chao.

Spiderman, Dorothy and Michael Jackson all turned up at the library last Wednesday as part of the Halloween Costume Contest. Keiki and adults had the chance to parade their outfits, and prizes were given out to the most original, scary and cutest in each age category.

There was a mix of both store-bought and home-made costumes, ranging from cowboys to Indians, princesses to pirates, and scary monsters to cuddly critters. Some of the most creative costumes included Maximus Sakamoto, who dressed up as a tornado and Kamahina Kanuha, who was painted almost entirely blue become a character from Avatar. There was also a piñata, Little Miss Piggy, a skeleton knight, a fridge monster and one youngster dressed as a video crane game. 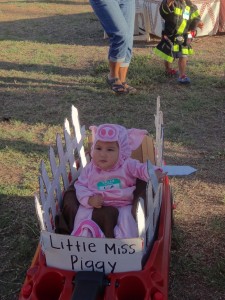 For the newborn to Pre-K division, Zoe Place won cutest costume as a skunk in a log. Klowe Bicoy claimed the title for scariest costume as a scary icebox. Koa Deschene, who dressed up as an airplane pilot with the plane attached, won won most original costume.

For Kindergarten through third grade, Maiya Naeole’s cowgirl outfit won first place for cutest costume. Jaiden Jordan was the scariest contestant as a scary jester. Kalawai`a Kanawaliwali’s crane machine costume was one of the day’s most original.

For the open age division, Nelly Vidal, who dressed as Marilyn Monroe, took home the prize for cutest costume. Vinnie Dudoit’s dead bride costume was undoubtedly one of the scariest of the day. The most original costume went to Lavie Lorico, who dressed up as a circus clown. Suliana, Fred and Peleke Aki took home the prize for the best group theme costumes as a hostess, waiter and chef team.

Small cash prizes, donated by Dean and Kahiwa Chow and Bob Schwartz, were awarded to contest winners with plenty of candy made available to all participants.
In the past, the event has been hosted by the Molokai Lions Club, but due to a lack of membership this year, was put on by a team of volunteers, including Mikiala Pescaia. 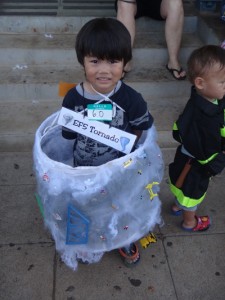 One of the most original costumes was Maximum Sakamoto, 4, who dressed up as a tornado. Photo by Eileen Chao

“The prizes aren’t lavish and it’s not a very huge or fancy event, but it is definitely an opportunity for our keiki to celebrate their imaginations, creative use of materials in homemade costumes, have fun and appreciate one another,” said Pescaia, who remembers the costume contest from her own keiki days. When she heard that the Lions Club would not be able to host this year’s contest, she quickly organized volunteers who agreed to lend a helping hand.

“[The event] is good for the community, it’s very well received and we hope like crazy to be doing it again next year,” said Mark Berfield, president of the Molokai Lions Club.

After the costume contest, many headed straight over to Kaunakakai Baptist Church to participate in the annual HallowHim festival, a Halloween alternative hosted by local churches. The popular event, which drew over a thousand people, featured game booths, live entertainment and free food that was donated by the churches. Across the street, King’s Chapel hosted their own festivities, the Pumpkin Patch, which offered plenty of candy, games, prizes and contest for keiki.