A Game 30 Years in the Making

The baseball field in Maunaloa sat abandoned for 30 years. There were no games, no lessons on teamwork or sportsmanship, no scoreboards and no homeruns. But Saturday morning, as overcast skies gave way to a bright, windy day, the boys and girls of Team Molokai made their way onto the field near Maunaloa Elementary School. For them it was just another ball game, but for the community it was so much more.

Team parent Kalehua Sproat Augustiro said the game gives a boost to an area that’s often outside of the action.

“It brings life to the town of Maunaloa,” Sproat-Augustiro said. “It’s nice to see people from other districts of the island come up here and support the town.”

Back in the Swing of Things

Sproat-Augustiro and her husband worked the concession stand at the game, selling plate lunches, drinks and cookies to support the school and community. They tried to remember the last time a game was played on the field, but they couldn’t think of anything besides a practice now and then.

Franklin Augustiro said the last game was in the early 1980’s, when his son was a kid. Now he was watching his grandson play there as part of a program that keeps kids in practice year-round and brings the sport into towns that don’t usually get to host games. 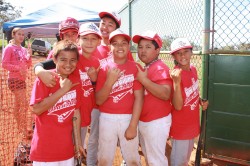 Nathan Starkey, who helped start Team Molokai Youth Instructional Baseball Camp, said last year – the first season for the league – they only played in Kaunakakai. This year, however, they play in different districts across the island, allowing kids to play games in their own neighborhoods.

“It’s a big thing for the communities to have people come out and support the kids,” Starkey said.

There are 60 kids involved in Team Molokai, ranging in age from 9 to 12. All ages play together on each team, which is named by its uniform color. Team Red and Team Blue kicked off the morning, and the green and yellow teams played after them.

Starkey watched the morning’s first game from behind home plate. Blue Team and Red Team were tied with four runs each at the top of the fifth inning. Already there had been four homeruns. He said Team Molokai plays Pony League style, allowing players to steal bases, which are farther apart than in Little League.

The league, which is coached by volunteers and sponsored by Maui County Parks and Recreation, helps kids learn the rules they will play by in high school, and it also keeps them playing baseball when Little League is off season. “If weren’t for the league, we’d be at home bored out of our minds,” Jayden, a third grader from Kualapu`u, said.

Starkey said that was why he helped create the league.

“From October to March there are no activities for the kids, so a lot of them get stuck in the do-nothing syndrome,” Starkey said. “So a bunch of us got together and put on this league.” 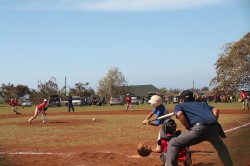 The Red Team and the Blue Team were tied for much of their game Saturday.

Players on the Red Team gathered in their makeshift dugout to talk about playing for Team Molokai.

The team agreed that Team Molokai keeps them active and in practice during the off season.

“You can get better at hitting and pitching and fielding,” said Lassen, a fifth grader at Kaunakakai Elementary.

Bill Umi, a Maunaloa resident whose son plays for the Green Team, said its nice having baseball back in the area and for his child to have an outlet to play ball when Little League is not in season.

“Everyone gets involved from the grandparents down to the child,” he said. “Everybody packs a lunch and comes out. It’s a wholesome way to spend the weekends.”

For more photos from Saturday’s game, check out the Molokai Dispatch Facebook: