A Field to Call Home 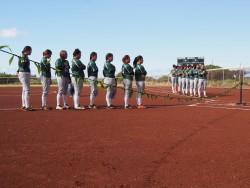 Molokai’s softball team lines up by maile lei that was cut as part of the new field’s official blessing. Photo by Catherine Cluett.

The Molokai softball team finally has a place to call their own. For years, the girls and coaches bussed to practices and games at the county’s ball field in Kaunakakai. Meanwhile, they put in hours of labor on weekends the last couple of years to pick rocks and prepare their future field at Molokai High. It all became worth it last Saturday, when the brand new field officially opened with a blessing and the first pitch was thrown on their home diamond.

In the 1990s, Head Coach Coco Augustiro said a field at the high school was built for softball but it wasn’t constructed to code and instead of holding games there, it was used for PE. When senior softball player Kelsie Tanabe started on the team as a freshman in 2012, she said the fence was too short to stop balls during practice, and the grass was rough.

“It was hard to practice because the dirt was full of rocks and lumpy, with holes in the grass,” she said. “The ball would bounce in any direction… There was a lot of running.”

Augustiro said from the 90s until 2012, the team practiced and played in Kaunakakai.

“As a softball coach in a contact sport with all females, it was hard to be far from the [athletic] trainer [at the high school],” she said. That’s when she decided to move the team practices back to the high school, rough field and all.

“Monsanto [helped] us clear and field and getting it prepped, and the softball girls… came every weekend and raked and picked up the rocks,” said Augustiro. “The state saw that we were trying to make improvements to the field but yet we couldn’t play home games on it.”

Around that time, more than half a million in state Capital Improvement Funds were allocated for the project, and the field began to take shape. The plan called for dugouts, changing facilities, new fencing and handicapped-accessibility to be incorporated.

With the new field finally finished, Augustiro said the team has been practicing there this season, and last Saturday, a blessing made its completion official.

“I want to congratulate you…for having such a first-rate facility, something that we can be proud of,” said Jimmy Duvauchelle, who offered the blessing.  “One of your biggest fans can sit there and scream my heart out for you guys every time.”

With bright white lines painted on the smooth dirt, high fencing to keep the ball in play and 19 girls ready for a strong season, the future is looking good for the defending Maui Interscholastic League (MIL) Championship team.

Athletic Director Lee DeRouin said he’s very excited to hold games and even a championship tournament there in the future.

“All the time the coaches and staff has put into this to see their dreams of a softball field has become a reality,” he said. “It’s a lot more convenient for the girls to go to school, change in the lockers and come out here to the field…  They can maximize their time [rather than driving into town].”

He said the new field will also be an asset for visiting teams, so they can sleep in the gym, have the field nearby and stay on school property. 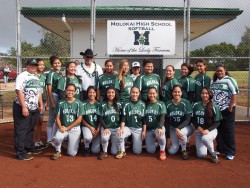 Molokai’s 2015 softball team and coaches with Jimmy Duvauchelle (in black Stetson), who blessed the field. Photo by Catherine Cluett.

Paleka and the two other seniors on the team – Tanabe and Kiona English — who have been there since their freshman year and “watched this field happen,” according to Augustiro, cut the long, maile lei across the field together during the blessing.

“I feel honored knowing our freshman year we had to clean it up and senior year finally get to play on it,” said Paleka.

Starkey threw the first pitch on the diamond during the blessing.

The team’s first game of the season will be at Seabury the first weekend in April, and their first game on the new field will be on April 17 and 18.

“Now it really will be called a home advantage,” chuckled Augustiro, “to really have a place to call home.”